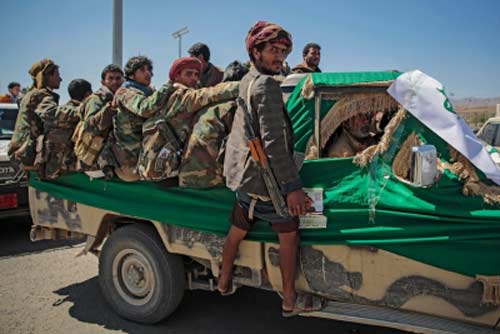 The Houthi militia in Yemen said they attacked a ship trying to “loot oil” in a key government-controlled port in the country’s southeastern province of Hadramout.

“The armed forces announced the implementation of a simple warning strike in order to prevent an oil ship that was trying to loot crude oil in the port of Dhabah in Hadramout Province,” Houthi military spokesman Yehya Sarea said in a statement on Friday.

However, a local security officer of the Dhabah port said the attack occurred when local authorities were preparing the shipment of crude exports to the global markets.

“Hours before the arrival of an exporting oil tanker to receive the shipment, two simultaneous explosions rocked the vicinity of Dhabah port,” the officer said .

Muammar al-Eryani, the information minister of the internationally-recognised Yemeni government, strongly condemned the Houthi attack as an act of “terrorism”.

He said that the Houthi group sent two explosive-laden drones to attack the oil ship.

“The attack is part of Houthi systematic targeting of infrastructure and attempts to destroy the national economy and expand attacks to include vital facilities that have been outside war for eight years,” the Minister added.

So far, there is no report on the casualties of the attack, which came after the government and the Houthi group failed to extend a national truce that expired on October 2, raising concerns about the return of violent conflicts to the Arab country.

Yemen has been mired in a civil war since late 2014 when the Iran-backed Houthi militia stormed several northern cities and forced the Saudi-backed government out of the capital Sanaa.

The war has killed tens of thousands of people, displaced 4 million and pushed the country to the brink of starvation.

Rupee slumps 76 paise to close at 82.61 against US dollar