Imran targeted for being too ‘pro-Israel’: Report 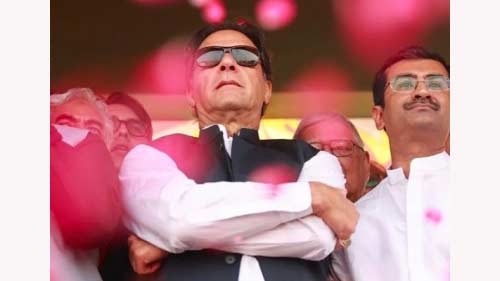 Former Pakistani Prime Minister Imran Khan was targeted during his long march in Wazirabad last week because the attacker said he was too “pro-Israel”, according to an Israeli media report.

According to the report in Israel’s Haaretz newspaper, Khan is “hardly the first Pakistani leader to endorse venomous narratives for political gains”.

“He used violence to promote his politics. He harmed parliamentary supremacy, supported attacks on civilian leaders and widened the scope of blasphemy laws. When he was ousted he created confusion through conspiracy theories. When a Pakistani group visited Israel in May, Khan regurgitated the same antisemitic allegations that had been used against him, referencing the new government’s movement towards recognizing the Jewish state,” The News quoted the Haaretz report as saying.

Pakistan reportedly inched closer to its formalisation of ties with the Jewish state and much of the progress on that front happened on Khan’s watch while he was in government, the newspaper added.

In October 2018, two months into the Imran Khan-led government taking over, the local media was brimming with claims that Israel’s then-Prime Minister Benjamin Netanyahu had visited Pakistan, The News reported.

Next year, a meeting with George Soros over potential developmental reforms in Pakistan, rekindled the antisemitic conspiracy theories against Khan, rooted in his first marriage to Jemima Goldsmith.

The Haaretz report said the prospect of official ties between the two countries moved in synchrony with the efforts towards the Abraham Accords in 2020.

By 2021, Khan’s closest aides were issuing clarifications over their own reported visits to Israel.

PTI sources have however claimed that the Israeli news report was baseless.

I was ‘objectified’ in early roles: Clooney