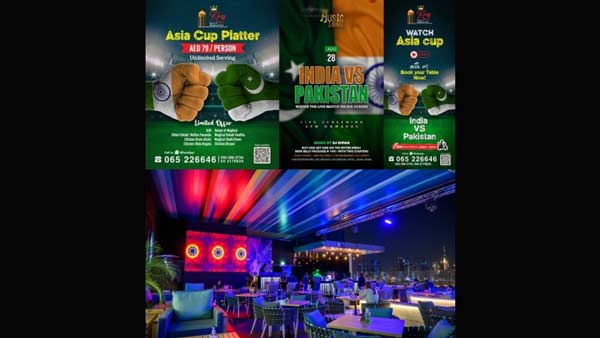 Hotels and restaurants in Dubai and Sharjah have offered a lifeline to diehard Indian and Pakistani cricket fans — who could not lay their hands on tickets for the blockbuster clash between the arch-rivals on August 28 –, giving them ‘mouth-watering’ deals to liven up their evening.

Thousands of fans remained logged into their computers and mobile phone for hours to buy tickets online for the clash, but only a few were lucky to get seats. However, hotels and restaurants have come out with offers to make viewing of the match equally pleasurable, and are offering delectable platters so that families and friend can come together for an evening of fun, food and music.

Adeeb Ahmed, the owner of ‘King — House of Mughlai Food’ in Sharjah, says he has installed two big screens in his restaurant for Sunday’s big clash.

“We are constantly getting enquiries and bookings from individuals and groups to watch matches at the restaurant. On the day of the match, we want to see love and brotherhood flowing among the supporters of the two countries. There’s no better way to enjoy the evening than watching the match with sub-continental cuisines,” says Adeeb.

“Our platters will have a mix of Pakistani with Indian food like Pakistani Kheer with Lucknawi Kawaband and Malabar Paranthas with Peshawari Chicken. Since both India and Pakistani fans are booking seats at our restaurant, we want them to enjoy the match with good food and an atmosphere of camaraderie. We have also arranged for music popular in the two countries.”

The ‘High Note Pool and Sky Lounge’ in Dubai has arranged to show the ‘biggest cricket rivalry’ on a giant screen. The lounge has arranged for an evening of drinks, good food and dance to go with the match.

Hari Kaimal, CEO of High Note, explains: “We have had to increase the bookings because of the overwhelming numbers. Now, there are only a few seats left for the fans.”

The Music Lounge has arranged for Indian and Pakistani music during the match where people can cheer their respective teams with their country music playing in the background.

Faizan Khan, an India team supporter, told IANS that he will be watching the match with his office colleagues at a sports bar as it was impossible for all of them to book tickets online.

“Our office group will watch the match together. It was very difficult to get tickets for all of them online. We then decided to watch the match at a sports bar,” he said.

Om Sharma, an Indian origin fan, said he tried desperately to get the tickets for the match but “luck did not favour” him. “Now, I will go to some restaurant with my family where we can enjoy the match together.”