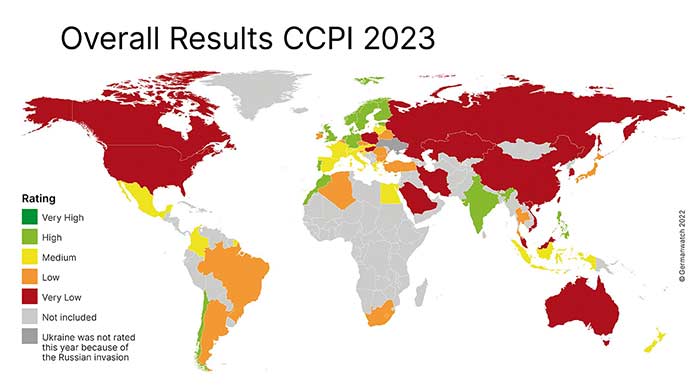 India climbed two spots to rank eighth out of 63 in the Climate Change Performance Index (CCPI) 2023, thanks to its low emissions and the increasing use of renewable energy.
The report was published on Monday by three environmental non-governmental organisations that track climate performance of the European Union and 59 countries, which together account for over 92 per cent of the greenhouse gas (GHG) emissions in the world.
The rankings by Germanwatch, NewClimate Institute and the Climate Action Network are based on how well the countries are doing to halve their emissions by 2030 — an essential aspect to keep the 1.5-degree Celsius goal within reach and prevent dangerous climate change.
The CCPI, which has been published since 2005, aims to enhance transparency in international climate politics and it enables comparison of individual countries’ climate protection efforts and progress.
The report leaves the first three places empty as “no country performed well enough in all index categories to achieve an overall very high rating”. It puts Denmark in fourth place, followed by Sweden and Chile.
India earned a high rating in the GHG Emissions and Energy Use categories, while it got a medium rating in Climate Policy and Renewable Energy sections.
China, which is the world’s biggest polluter now, fell 13 places to 51st in this year’s CCPI and received an overall very-low rating due to plans for new coal-fired power plants.
The US rose by three ranks to the 52nd place. Iran (63rd), Saudi Arabia (62nd) and Kazakhstan (61st) fared the worst.
The report said India is “on track” to meet its 2030 emissions targets, compatible with a well-below 2-degree-Celsius scenario. “However, the renewable energy pathway is not on track for the 2030 target,” it said.
Since the last CCPI, India has updated its Nationally Determined Contribution (NDC) and announced a net-zero target for 2070. Net zero means achieving a balance between the greenhouse gases put into the atmosphere and those taken out.
The NDCs are national plans to limit global temperature rise to well below 2 degrees Celsius, preferably to 1.5 degrees Celsius in accordance with the Paris Agreement.
In August, India released its updated NDCs and now stands committed to reducing emissions intensity of its GDP by 45 per cent by 2030 from the 2005 level.
It aims to achieve about 50 per cent cumulative electric power installed capacity from non-fossil fuel-based energy resources by 2030. These NDCs are, however, contingent on delivery of finance and technology transfer.
Experts welcomed the new targets and the political signals towards climate action in India
Despite India’s medium rating in the Renewable Energy category, the country has included renewables targets in its updated NDC. Yet, the experts cite missing roadmaps and concrete action plans for achieving the targets. They stressed on the importance of a just and inclusive energy transition, as well as the need for decentralised renewable energy and capacities for rooftop photovoltaics.
A carbon-pricing mechanism, the need for more capacities at the sub-national level and concrete action plans for achieving the targets are key demands.
The report noted that India is among the nine countries responsible for 90 per cent of global coal production and it also plans to increase its oil, gas, and oil production by over 5 per cent by 2030.
“This is incompatible with the 1.5 degree Celsius target,” the CCPI experts said.