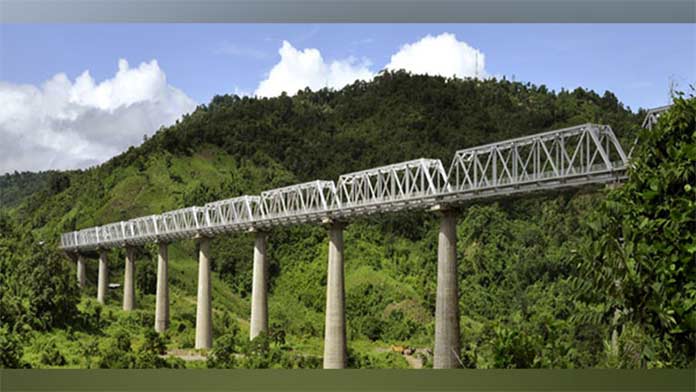 To strengthen the rail network in the northeastern region of the country, Indian Railways has planned to lay railway tracks right upto the China border in Arunachal Pradesh, all state capitals, besides connecting neighbouring Bhutan, reports ANI.
Indian Railways will construct railway lines from Bhalukpong to Tawang along the China border and Silapathar to Along via Bame, which once ready will have strategic importance because it will connect the border areas in the shortest time.
According to the Railway ministry, the final location survey of these new railway projects in Arunachal Pradesh is in full swing.
Sabyasachi De, Chief Public Relations Officer (CPRO) of Northeast Frontier Railway told ANI that the NF Railway has planned to construct a few more new railway projects in the northeastern region including Arunachal Pradesh.
“We have planned to construct a new railway line from Bhalukpong to Tawang, Silapathar to Along via Bame and extend the railway line from Murkongselek to Pasighat,” Sabyasachi De said.
De further said that apart from these, it is planning to construct a second railway line from Lanka to Chandranathpur in Assam which will be the bypass in the hill section of the Dima Hasao district of Assam.
Notably, railway tracks in some portion of Dima Hasao got uprooted due to floods and landslides earlier this year, which have been repaired on a war footing and are now fully functional. Railways also plan to connect neighbouring Bhutan.
“We have planned to connect Bhutan through railway and the new railway line will be from Kokrajhar (in Assam) to Gelephu in Bhutan. This new railway line will be around 58 km long,” Sabyasachi De said.
The NF Railway CPRO said that the construction works of many railway projects are going on in the region and the total quantum of these projects is worth around Rs 1.15 lakh crore — the scope of these projects ranges from new lines, doubling, station development, electrification.
“The capital connectivity projects are going on in full swing and we are going to connect the capitals of Mizoram and Manipur. In the coming one year, we might get connected to the capitals of Nagaland and Sikkim. Two main lines to Guwahati that is New Bongaigaon-Rangia-Kamakhya, and New Bongaigaon-Goalpara-Kamakhya are getting double. We have also done electrification, we are going beyond Guwahati now,” De said.
“We have also planned of doubling the line from Lumding to Tinsukia. We have planned to electrify the whole railway network in the NF Railway by the end of next year. The NF Railway is developing a few stations as world-class stations. Kamakhya, New Jalpaiguri, Agartala, Silchar, and New Tinsukia stations will get developed as world-class stations. The state capital stations will also to be developed as world-class stations and we will try to reflect the culture and history of that place in these stations,” the CPRO of NF Railway said.
“The NF Railway is fist of introducing Intrusion Detection System to detect animals in the railway lines. It is an artificial intelligence based optical fiber system which has a capability of detecting elephants whenever it is approaching the railway tracks,” De explained.
“Not only elephants, when other animals approach the railway tracks, the alert message will go to the loco pilot which able to stop the train on time. We have completed the pilot project in Lumding-Hawaipur section and in Alipurduar division. We will be able to get the system in all the elephant corridors.”
The NF Railway CPRO said that, the pilot project of ‘Intrusion Detection System’ was completed in the Lumding-Hawaipur section in the month of July and Alipurduar division in October this year and the NF Railway is confident that, by commissioning the system in all elephant corridors, this system will be eliminating the elephant accident cases.
“It is a technologically advanced system and it will not have any affect in the surrounding wildlife area as it is an environment-friendly system,” the spokesperson said.