Italy’s support for Ukraine ‘subject of debate’ amid widespread protests 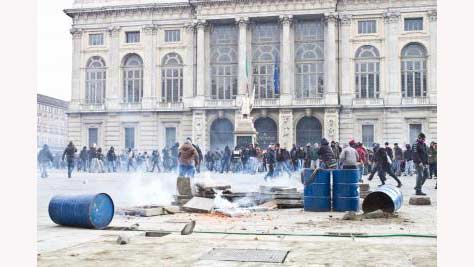 The Italian media has cast the future of the country’s military support for Ukraine in its war with Russia in doubt, a day after tens of thousands of people took to the streets of Rome and Milan to protest against the arms shipment to Kiev.

“More arms for hugs, no more wars!” read one banner carried by a man who wore a rainbow scarf in Rome.

Italy is a founding member of both the NATO and the European Union (EU) — both of which broadly support financial and military aid for Ukraine.

But amid skyrocketing energy prices and an economic slowdown sparked by the crisis, a growing number of Italians argued that current policies risk prolonging the war while diverting resources the government should be spending domestically.

On Friday, foreign ministers from the G7 countries reiterated their vow to continue supporting Ukraine, and new Italian Prime Minister Giorgia Meloni said that the country’s support for Ukraine would not waver and that more weapons would be sent soon.

According to Italian daily Il Sole 24 Ore, the protests have shined a new light on differences among Italian political leadership, with former Prime Minister Giuseppe Conte — now a member of the government opposition — stating on Sunday that no more arms would be sent without parliamentary approval.

“We need a breakthrough toward a ceasefire and peace negotiations,” Conte was quoted by media, adding that the current strategy “is only leading toward escalation”.

The debate over the country’s support for Ukraine comes as the new Italian government, which was sworn in on October 22, seeks to hammer out details of the 2023 national budget and lay out strategies for sparking economic growth and curbing record-high inflation.

Cab appeals ENPO to participate in Hornbill Fest; says Statehood demand can be discussed in NLA