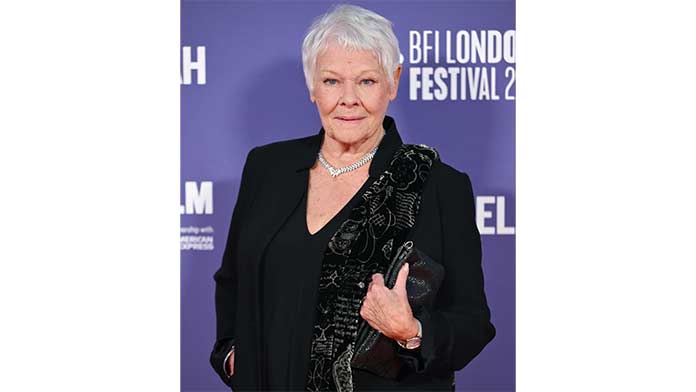 British actress Judi Dench has called on Netflix to add a disclaimer to royal drama “The Crown”, joining a chorus of voices criticising the series’ fictionalised storylines.
In a letter to The Times on Thursday, the 87-year-old veteran said as the award-winning show approached present times “the more freely it seems willing to blur the lines between historical accuracy and crude sensationalism”.
“While many will recognise The Crown for the brilliant but fictionalised account of events that it is, I fear that a significant number of viewers, particularly overseas, may take its version of history as being wholly true,” Dench wrote.
Dench has portrayed historical queens Elizabeth I and Queen Victoria on screen as well as James Bond’s boss “M”.
Netflix says “The Crown”, which follows the reign of late Queen Elizabeth over the decades, is “fictional dramatization”, inspired by real events. Its fifth season, in which a new cast will portray the royal family in the 1990s, premieres on Nov. 9, two months after King Charles ascended the throne.
“No one is a greater believer in artistic freedom than I, but this cannot go unchallenged… the programme makers have resisted all calls for them to carry a disclaimer at the start of each episode,” Dench wrote.
“The time has come for Netflix to reconsider — for the sake of a family and a nation so recently bereaved, as a mark of respect to a sovereign who served her people so dutifully for 70 years, and to preserve its reputation in the eyes of its British subscribers.”
Dench’s letter follows other criticism, including a statement from former Prime Minister John Major’s office to the Daily Mail calling a new scene a “barrel load of nonsense”.
According to the newspaper, the scene reportedly shows Charles speaking to Major as part of a plot to get the queen to abdicate.
Major’s office denied any such conversation took place.
Dench referenced the scene, calling it “both cruelly unjust to the individuals and damaging to the institution they represent”. Some royal commentators have also voiced concern the impact the show could have at the start of Charles’ reign.
A Netflix representative did not immediately respond to a request for comment.
“I think we must all accept that the 1990s was a difficult time for the royal family, and King Charles will almost certainly have some painful memories of that period,” series creator Peter Morgan told Entertainment Weekly this week.
“But that doesn’t mean that, with the benefit of hindsight, history will be unkind to him, or the monarchy. The show certainly isn’t.”