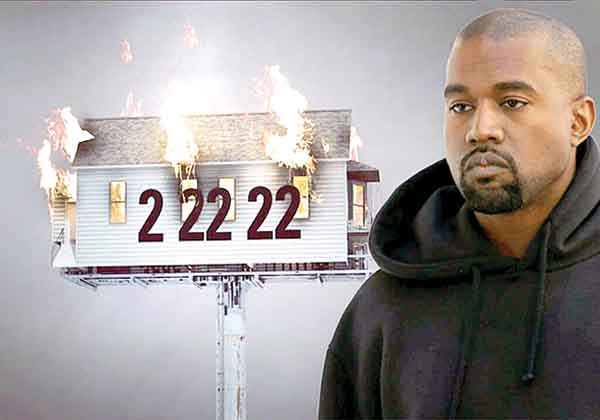 Rapper Kanye West’s sequel to last year’s ‘Donda’ is coming out next month in February.
Kanye announced that ‘Donda 2’ is set to release on February 22. The 2/22/22 release date is appropriate for the first sequel album he’s made in his career, reports variety.com.
He made the announcement with a picture of his Chicago childhood home on fire, along with the news that Future will executive-produce ‘Donda 2’.
Last year, during one of his ‘Donda’ album listening concerts, Ye famously built a replica of his home in the centre of Soldier Field in Chicago, reports variety.com. More infamously, that was the same concert where he brought out controversial musicians Marilyn Manson and DaBaby on the steps of his house. Earlier this month, it was revealed that Ye had begun working on ‘Donda 2’, just a few months after the original ‘Donda’ was released on August 29, 2021, after several delays; earlier this week, Steven Victor, a Universal Music executive and longtime associate of West’s said the album is coming “sooner than you think.”
However, fans of the prolific rapper know that Kanye has a long relationship with album delays and projects that are announced but never fully realised, so whether or not ‘Donda 2’ actually releases on time will likely only be revealed on the morning of February 22.
‘Donda’, which was named after Ye’s late mother, is up for several Grammy awards, including major categories album of the year and rap album of the year.
The song ‘Hurricane’, featuring the Weeknd and Lil Baby, is up for best melodic rap performance, and ‘Jail’, featuring Jay-Z, is nominated for best rap song. (IANS)