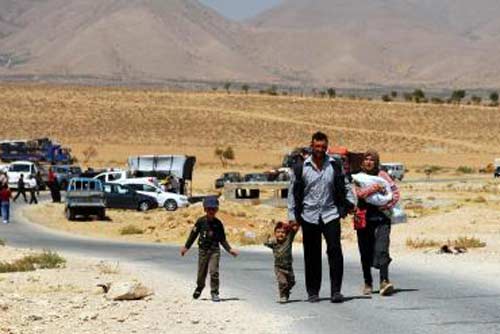 Around 500,000 Syrian refugees have registered for their voluntary return from Lebanon to their homeland, and Beirut has called on the international community and donors to facilitate their forthcoming return.

Abbas Ibrahim, chief of the Lebanese General Security, said on Tuesday that a total of 500,000 Syrian refugees have registered in 17 centres to voluntarily return to their country, reports Xinhua news agency.

Ibrahim’s remarks came during a press conference to give an overview of the process that will be followed in returning Syrian refugees to their homeland, which will kick off on Wednesday.

Meanwhile, Minister of Social Affairs Hector Hajjar on Tuesday called on the international community and donors to facilitate the forthcoming homeward return of Syrian refugees safely from Lebanon.

Hajjar made the remarks in the town of Arsal in northeastern Lebanon, where he would supervise the return of the first convoy of Syrian refugees scheduled for Wednesday.

Burdened by the hosting of a large number of refugees, Lebanon has decided to help 15,000 Syrian refugees return home on a monthly basis.

The Minister said the living condition of the refugee camp is “disastrous”, and for a small town like Asal, hosting a large body of refugees is overwhelming in almost every aspect.

Hajjar reiterated their home return will be facilitated by the coordination and cooperation between Lebanese security agencies and the Syrian sides.

Lebanon hosts the world’s largest number of refugees per capita, with a government estimate of the Syrian refugees in the country at 1.5 million.

Having been struggling with a worsening financial crisis since late 2019, Lebanon has repeatedly said the influx of refugees weighs heavily on the country’s economy and infrastructure.

SourceIANS
Previous article
S.Korea, US, Japan hold talks amid speculation on N.Korea nuke test
Next article
Almost every child on earth will suffer from heatwaves by 2050: Unicef
Must Read

TDFA Cup from Dec 3 in Tuensang