LeBron surpasses Malone for most 20-point games in NBA history 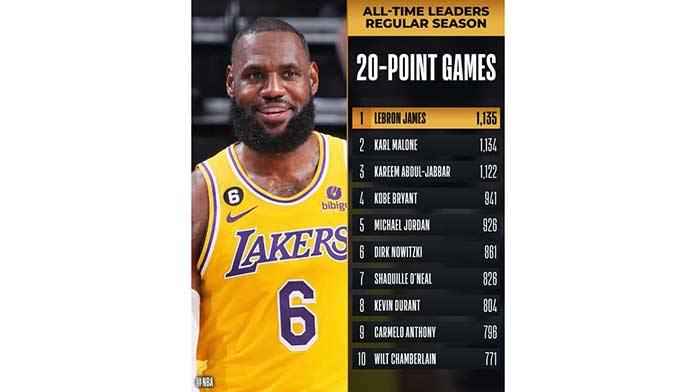 Los Angeles Lakers’ LeBron James on Saturday surpassed Karl Malone’s record of most 20-point games in the history of NBA. With his eighth field goal of the game against Minnesota Timberwolves, James recorded his 1,135th career 20-point game. Despite LeBron achieving this feat, the Lakers went down 102-111 against the Timberwolves. Anthony Edwards scored 16 of his 29 points in the third quarter, Rudy Gobert added 22 points and 21 rebounds, and Minnesota handed Los Angeles its fifth straight loss to open the season.
Aside from his new 20-point game accomplishment and closing in on Abdul-Jabbar’s all time leading scorer in NBA history record, James is also among the all-time leaders in minutes (3rd), assists (7th) and steals (10th).Meanwhile, Giannis Antetokounmpo scored 30 points as the Milwaukee Bucks extended their winning run this season with a 119-108 victory over the New York Knicks. Antetokounmpo made 14 rebounds and nine assists at the Fiserv Forum in Milwaukee as well as reaching 30 points for the third successive game.