Lindsay on returning to Hollywood after 10 years: ‘I felt like it was time’ 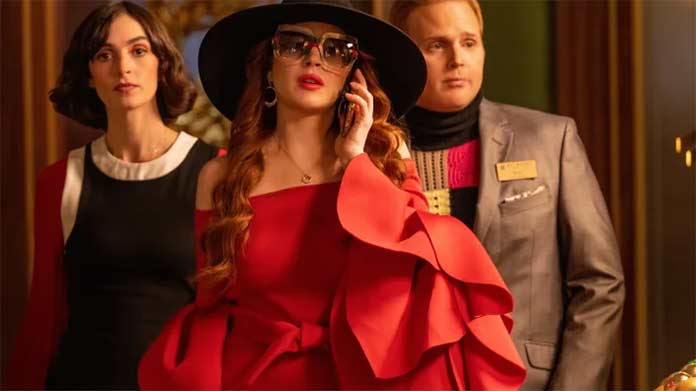 After essentially leaving the industry in 2014, the Mean Girls star returns in her first major movie role in almost a decade with Netflix’s Falling for Christmas. Lohan fans have been clamoring for the actress’s comeback, especially as stars like Britney Spears and Paris Hilton, who ruled the tabloids with Lohan in the early aughts, have taken back control of their narratives in recent years.
“I just felt like it was time, and it was just a matter of time before I found the right script and I found it with Falling for Christmas,” Lohan tells Yahoo Entertainment about her to return to Hollywood. “It just worked out perfectly.”
Lohan adds that she was “missing being on set and missing making movies for my fans and for my audience.” That prompted the actress’s deal with Netflix and Falling for Christmas is the first of three pictures she’ll do with the streaming giant. Lohan, who stars alongside Glee’s Chord Overstreet in the holiday rom-com, admits she was “nervous” stepping on set again after so many years away.
“The first day on set I’m always nervous on any set I’m on,” the 36-year-old says, noting she was “even more nervous on this one, but more excited. I don’t know if I was annoying! I was just really excited to be there. “ (For the record, Overstreet says she was not annoying.) “I felt really grateful, I feel really blessed,” Lohan continues. “It’s all been a lot of fun.”
One fun moment in the film that Mean Girls fans will surely love is Lohan’s rendition of Jingle Bell Rock. It’s a clear homage to a classic scene in the 2004 film that the actress says came to be after she was “kidding around” on set with producers.
(Yahoo entertainment)Although Lohan ditched Hollywood for Dubai, the newly married star still has support with her peers. Jamie Lee Curtis, who starred in 2003’s Freaky Friday with Lohan, previously spoke to Yahoo about the wild way they stay in touch. Curtis explained they have a secret “text code,” which Lohan confirmed.
“We do,” Lohan giggles. “Every time, I don’t know why it is, but every time I email her… she does this row of test questions that I have to answer from something that happened in the past from a movie set, from Freaky Friday, and I have to get the questions right or she will not — she’s like ‘Nope, not you. Bye!’”
For the record, Curtis said one of the test questions involved a Justin Timberlake song.
“I’ve gone at great lengths to get her on the phone!” Lohan adds. “I’ve even sent her videos like, ‘Hey it’s me!’ to her Instagram account. And then we get on the phone, and then we talk. We just are too much fun together, the two of us.”
Does that mean the Lohan-aissance could involve a Freak Friday sequel?
“I think we are all into it, so we’ll see,” Lohan teases. “Crossing our fingers.