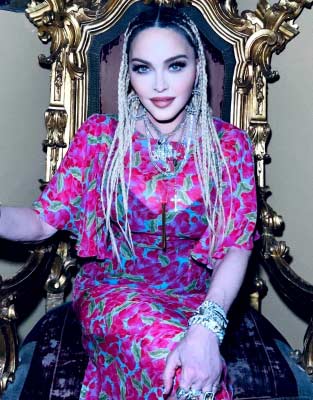 Queen of pop Madonna has taken to her Instagram Story to make a bizarre circumcision confession.

The ‘Like a Virgin’ songstress wrote over a plain background: “I have a confession to make.” She followed it up with a picture of her holding a wine glass with her colourfully-painted nails.

Another photo shows her taking a sip from the glass, while the third one sees her bending towards her phone’s camera. The next shot features her in the same position with her removing her sheer blue skirt and putting it around her head.

Over the images, she declared: “I was not circumsised.”

Following Madonna’s bizarre posts, many have questioned the singer’s intention in making the confession, reports aceshowbiz.com.

“Ever notice people like Madonna who are no longer in the spotlight due to age or whatever reason NEED IT? SUDDENLY they change sexual preference, say something OUTRAGEOUS like bombing the White House or just ANYTHING to get BACK to people paying ANY kind of attention to them?” one person reacted on Twitter.

Others accused Madonna of trying to stay “relevant,” with a tweet.

One blasted her: “More gender confusion from Liberal Hollywood Loonies,” as another added: “Holy crap she looks bizarre.”

A baffled user asked, “What does that even mean,” while a fan said: “I am concerned. Madonna is acting strange even for madonna.”

Someone else called her out as a “Depraved human being.”

Prior to this, Madonna made a jaw-dropping confession about her sexuality. In an October 9 post, she appeared to come out as gay through a TikTok video.

BCCI serves notice to its president