Magical Messi saves his best for last in Qatar 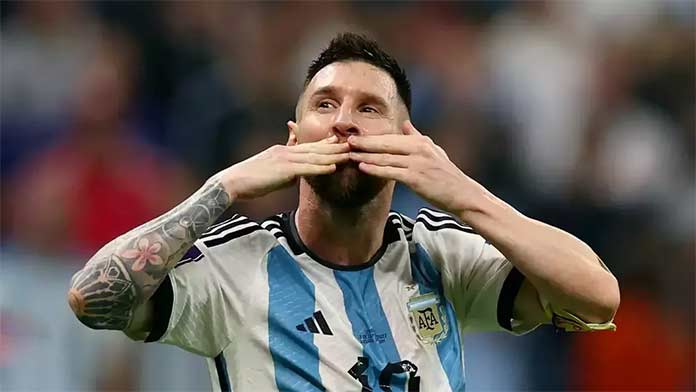 As if he had not made enough fairy-tales, Argentina’s little genius Lionel Messi has saved the potentially most magical script for his last World Cup – with one line left to write.
With immense pressure on him to match the late great Diego Maradona and send the trophy back to Buenos Aires, Messi has lit up the Qatar tournament while others in the superstar stratum – Neymar, Cristiano Ronaldo – have underwhelmed and gone home.
From Argentina’s opening game until their semi-final win over Croatia, Messi, near the end of his career and at his fifth World Cup aged 35, has been the tournament’s out-and-out star. His match statistics speak for themselves: six starts, five goals, three assists en route to Sunday’s final against France.
Smashing so many records it is hard to keep track, Messi has beaten Maradona’s tally of World Cup goals and appearances for Argentina, and on Sunday will jump ahead of Lothar Matthaeus’ joint record 25-match appearances at the tournament.
Beyond the dazzling data, however, it has been Messi’s mesmerizing motion, and joyous celebrations, that have electrified football fans around the world.
Spending large passages of play at walking pace and barely bothering to defend at times, Messi has waited for his moments, employing with deadly effect his low centre-of-gravity, stunning change of pace and shimmying runs with ball glued to feet.
He is “a sprite floating on the periphery of the game until the moment is right,” wrote British sports writer Jonathan Wilson. “You can mark a man; much harder to mark a ghost.”