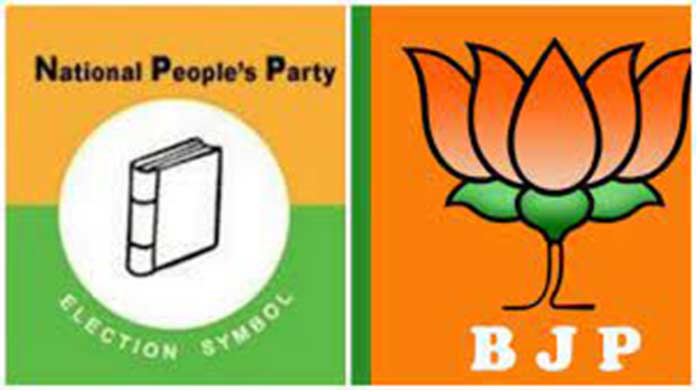 Several police complaints and finally the arrest of BJP state vice president in Meghalaya, Bernard Marak last year has strained the relation of the party with its ally National People’s Party (NPP).
The two coalition partners have decided to go solo in the state election, with Conrad Sangma’s party already announcing the candidates for the 58 seats in the 60-member Meghalaya Assembly, while the BJP is yet to finalise the candidates’ names. Marak, an elected member of the Garo Hills Autonomous District Council, was accused of running a brothel in his farmhouse. According to the police, arms and ammunition were seized from his house. The BJP leader was also accused of raping a three-year-old girl at his farmhouse. He was absconding and later arrested from Uttar Pradesh.
Recently, Marak got bail from the court after spending three months in jail. He alleged foul play in the entire incident, hinting that the Chief Minister was behind his arrest. Marak has also announced that he will contest against Conrad Sangma from the South Tura seat making the fight between two allies uglier.
But it was not only Marak’s case, there were several other points where the NPP and BJP differed in the recent days. Bharatiya Janata Party’s strong pitching for Uniform Civil Code (UCC), firing incident in the Mukroh village where five civilians were killed due to gunfire by the Assam Police had further caused a dent in the alliance.
The BJP, in 2018, was extremely confident about putting up a strong show and expected to win a good number of seats in Meghalaya. With campaigns by the central party leaders, including PM Narendra Modi and former party president Amit Shah, the party hoped to win over people and gain momentum in the run-up to the elections.
However, the results came as a huge shock for the BJP. The party only managed to win two seats from the Khasi Hills region and failed to mark even a win in the Garo Hills, where they expected to come up with 5-6 seats. Later, the BJP forged an alliance with the NPP and enjoyed power in the state for the last five years.
The saffron camp believes that they have learned lessons from last year’s debacle, when the ban on beef and other comments by a few leaders caused harm in the votes. The entry of some MLAs from the NPP and Trinamool Congress also added strength to their base. Other prominent leaders in the state also joined the BJP. The party has been estimated to win at least five seats from the Garo Hills area this time. However, it is clear that the BJP cannot form a government in Meghalaya on its own.
In 2018, the NPP won 20 seats, and it formed the government with the support of the BJP, the United Democratic Party (UDP), and the Hill State People’s Democratic Party (HSPDP). The UDP and HSPDP are also fighting it out in the polls without stitching an alliance with Conrad Sangma’s party. The HSPDP has lost many leaders to the UDP and now has very little strength to catch votes.
Now, the question doing the rounds is whether fighting against each other will divide the votes among the NPP, BJP, and the UDP that may become useful for either the Trinamool or Congress parties to pull off a win in the election? As of now, the answer is no. It is the NPP only from the ruling dispensation that has claimed to get a clear majority in the Assembly. There is no doubt that Conrad Sangma’s party is the front-runner in the upcoming election. Both the BJP and UDP will not fight in all seats.
According to the party sources, the BJP will field candidates in around 20-25 seats, while the UDP may fight in a lesser number of seats than the BJP. Therefore, the division formula in votes will not work in the rest of the seats. The NPP will not field candidates in two seats, thus paving the way for one candidate to win from each of the BJP and UDP. Moreover, the Khasi people see the Trinamool Congress as a Bengali-dominated party, and they have a clear resistance to voting for them. The Congress has lost most of its strength, and political pundits are saying that the party can barely win 3-4 seats.
In this scenario, the chances of either the NPP winning with a clear majority or forming a government with a post-poll alliance with the BJP and UDP are quite high. Sources are saying that Conrad Sangma has kept the window of negotiations open, and after the result, a government replicating the previous regime is most probable in the hilly state.