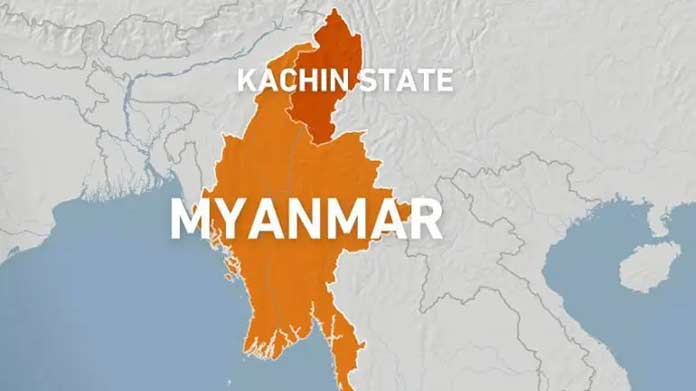 Air strikes by Myanmar’s military killed as many as 80 people, including singers and musicians, attending an anniversary celebration of the Kachin ethnic minority’s main political organisation, members of the group and a rescue worker said on Monday. The reported attack comes three days before Southeast Asian foreign ministers are to hold a special meeting in Indonesia to discuss widening violence in Myanmar.
The number of casualties at Sunday night’s celebration by the Kachin Independence Organisation in the northern state of Kachin appeared to be the most in a single air attack since the military seized power in February last year from the elected government of Aung San Suu Kyi. Initial reports put the death toll at around 60, but later tallies raised it to about 80.
It was impossible to independently confirm details of the incident, though media sympathetic to the Kachin posted videos showing what was said to be the attack’s aftermath, with splintered and flattened wooden structures.
The military government’s information office confirmed in a statement late Monday that there was an attack on what it described as the headquarters of the Kachin Independence Army’s 9th Brigade, calling it a “necessary operation” in response to “terrorist” acts carried out by the Kachin group. It called reports of a high death toll “rumours,” and denied the military had bombed a concert and that singers and audience members were among the dead.
The United Nations’ office in Myanmar said in a statement that it was “deeply concerned and saddened” by reports of the air strikes. “What would appear to be excessive and disproportionate use of force by security forces against unarmed civilians is unacceptable and those responsible must be held to account,” it said.
Envoys representing Western embassies in Myanmar, including the United States, issued a joint statement saying the attack underscores the military regime’s “disregard for its obligation to protect civilians and respect the principles and rules of international humanitarian law.”
Myanmar has been wracked for decades by rebellions by ethnic minorities seeking autonomy, but anti-government resistance increased markedly nationwide with the formation of an armed pro-democracy movement opposing last year’s military takeover.
The Kachin are one of the stronger ethnic rebel groups and are capable of manufacturing some of their own armaments.
They also have a loose alliance with the armed militias of the pro-democracy forces that were formed in central Myanmar last year to fight army rule.
Sunday’s celebration of the 62nd anniversary of the founding of the Kachin Independence Organisation, which included a concert, was held at a base also used for military training by the Kachin Independence Army, the KIO’s armed wing. It is located near Aung Bar Lay village in Hpakant township, a remote mountainous area 950 kilometers (600 miles) north of Myanmar’s biggest city, Yangon.
Hpakant is the center of the world’s biggest and most lucrative jade mining industry, from which both the government and the rebels derive revenue.
As many as 80 people were killed and about 100 were injured in Sunday’s attack on the first day of a three-day celebration of the KIO’s founding, a spokesperson for the Kachin Artists Association told The Associated Press by phone. He said he first heard there had been 60 deaths, but was later told by sources close to Kachin Independence Army officials that there had been about 80 people had died.
He said military aircraft dropped four bombs on the celebration at about 8 pm, according to members of his group who were there. Between 300 and 500 people were in attendance and a Kachin singer and keyboard player were among the dead, said the spokesperson, who asked not to be identified.