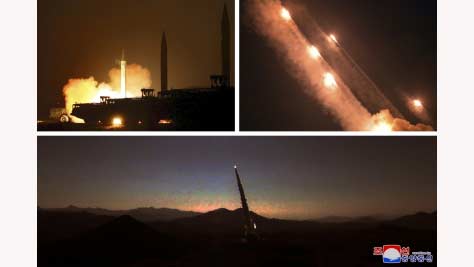 The North Korean military on Tuesday denied exporting weapons or ammunition to Russia and said that it has no plans to do so, accusing the US of spreading “groundless” rumours.

In a statement issued by the vice director of the Military Foreign Affairs of the Ministry of National Defence, Pyongyang warned Washington against spreading such a “plot-breeding story”, reports Yonhap News Agency.

“We regard such moves of the US as part of its hostile attempt to tarnish the image of the DPRK in the international arena by invoking the illegal ‘sanctions resolution’ of the UN Security Council against the DPRK,” he said, referring to the North by its official name, the Democratic People’s Republic of Korea.

“We once again make clear that we have never had ‘arms dealings’ with Russia and that we have no plan to do so in the future,” he added in the statement carried by the official Korean Central News Agency (KCNA).

Earlier, US intelligence said Russia may be in the process of purchasing millions of rockets and artillery shells from North Korea, which would violate multiple UNSC resolutions on the North.

In response, the North denied such an arms deal in a statement released by its vice director general of the General Bureau of Equipment in September.