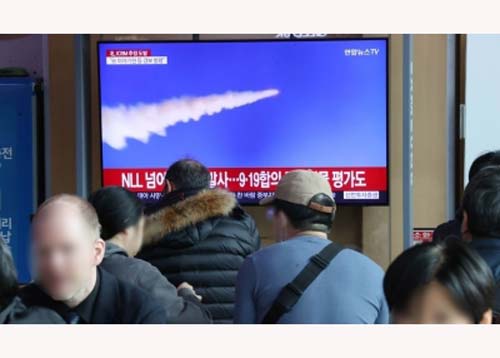 North Korea fired one short-range ballistic missile (SRBM) into the East Sea on Thursday, its first missile provocation in a little over a week, according to the South Korean military.

The Joint Chiefs of Staff (JCS) said it detected the launch from the Wonsan area in Kangwon Province at 10.48 a.m., reports Yonhap News Agency.

It did not provide other details.

“While strengthening our monitoring and vigilance, our military is maintaining a full readiness posture in close cooperation with the US,” the JCS said in a statement.

The launch came shortly after North Korean Foreign Minister Choe Son-hui warned the North will take “fiercer” military actions if the US sticks to a move to strengthen its “extended deterrence” commitment to regional allies.

Extended deterrence refers to Washington’s pledge to use a full range of its military capabilities, both nuclear and conventional, to defend its allies.

US President Joe Biden reaffirmed that pledge during a trilateral summit with South Korean President Yoon Suk-yeol and Japanese Prime Minister Fumio Kishida on the sidelines of annual regional gatherings in Phnom Penh on Sunday.

The North previously fired a short-range ballistic missile into the East Sea on November 9.