N.Korea threatens to take ‘overwhelming’ military steps against S.Korea, US 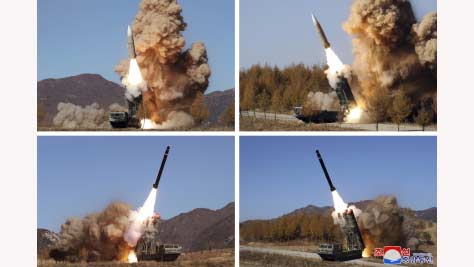 North Korea’s military said on Monday that it will take “sustained, resolute and overwhelming” practical military measures in response to joint military drills of South Korea and the US amid speculation that Pyongyang may carry out another nuclear test just before or after the American midterm elections on Tuesday.

“The recent corresponding military operations by the KPA are a clear answer of the DPRK that the more persistently the enemies’ provocative military moves continue, the more thoroughly and mercilessly the KPA will counter them,” the KPA said in the English-language statement.

The DPRK is the acronym for the North’s official name, the Democratic People’s Republic of Korea.

The KPA slammed the recent Vigilant Storm exercise as an “open provocation aimed at intentionally escalating the tension in the region”.

“The KPA General Staff once again clarifies that it will continue to correspond with all the anti-DPRK war drills of the enemy with the sustained, resolute and overwhelming practical military measures,” it added.

G20 summit in Manipur’s Loktak Lake will be a memorable one: Kiren Rijiju

Competition among Cong leaders to abuse me: PM