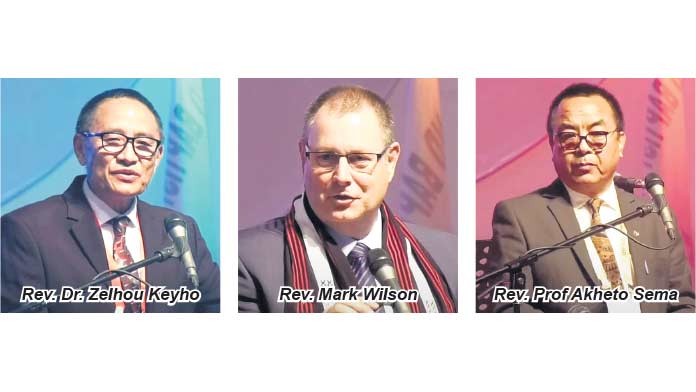 Nagaland Baptist Church Council (NBCC) began its two-day sesquicentennial celebration (150 years of Christianity) Saturday evening at NBCC Convention Centre under the theme “His Story”.
A large number of delegates representing 20 associations and four associate members from Assam Baptist Convention (ABC), Manipur Baptist Convention(MBC), Arunachal Baptist Churches Convention (ABCC), Garo Baptist Convention (GBC), North East India Christian Council(NEICC), Council of Baptist Churches in North East India (CBCNEI), Asia Pacific Baptist Federation(APBF), Baptist World Alliance (BWA), India Mission Coordination Committee (IMCC), Assemblies of God (AG), Christian Revival Churches (CRC) and Karbi Baptist Churches Convention(KBCC) are among those taking part at the two-day celebration (November 19-20).
Delivering the message at the opening day of the celebration, NBCC general secretary Rev. Dr. Zelhou Keyho reminded the congregation of the struggles and sacrifices made by the first missionary Dr EW Clark while reaching out to the Nagas living in spiritual darkness.
Dr. Keyho acknowledged that Christianity first entered into the Ao through Dr Clark in 1872, after which Nagas no longer live under the shadow and fear of death, but have received mercy which is the story of the third jubilee.
He said people of Nagaland celebrating 150 years of Christianity, was “a historic moment and journey of our faith”. Dr. Keyho said “We are here to celebrate God’s favour upon the Nagas. We celebrate a story of how a people in the bondage of sin and darkness were liberated and redeemed as children of God” and a time for the people to connect the dots of the past to the present.
He said the Naga story is found in two passages in the Bible– Isaiah 9:2 “The people that walked in darkness have seen a great light; they that dwell in the shadow of death, upon them hath the light shined” and the second passage was from 1 Peter 2:10 “Once you were not a people, but now you are the people of God; once you had not received mercy, but now you have received mercy.”
Keyho also admitted that the story of Christianity in Nagaland was far from perfect, with batches of misunderstanding, while pioneers were rejected and disconnected from villages. In this, he said the 150th sesquicentennial was to celebrate His love, His faithfulness that one must not forget.
Dr. Keyho pointed out that before the gospel reached the Nagas, they were not known by names, not even by tribe, but referred to as barbarians, savages, head hunters etc.
He urged upon the congregation to take “His Story” seriously as each and every individual was assigned with the responsibility of a lifetime to tell “His Story”. He reminded the congregation that there was no better gift one can give to the next generation, which is the “legacy of faith”.
“We must tell ‘His Story’ to ourselves, to our children and to our children’s children”, Keyho stated.
In his concluding message, he prayed that “His story become our story and may His story become your story.”
While extending greetings, Asia Pacific Baptist Federation president Rev. Mark Wilson congratulated the NBCC and the churches for coming together to celebrate 150 years of Baptist ministry in Nagaland.
Wilson said he was also amazed when he read about the history of the church in Nagaland made up of 20 associations and four associate members, totalling around 1708 churches. He said there is expediential power when Baptists, fully filled with the character of Christ get together to have fellowship, worship, serve, love and pray together. “Its an unstoppable force for good when we do this together. There is no greater power then the Church, when the church of Jesus Christ is built,” he said.
Bringing greetings, president of the Council of Baptist Churches in North East India, Rev. Prof Akheto Sema said it was a privilege of a life time to be in this chapter, in history during our lifetime to celebrate 150 years of Christianity.
Apart from history, he said the people are here to celebrate “His Story. He said the same story will be carried over to our next generation. Rev. Akheto said His love, grace, forgiveness, and His goodness are new from the beginning and till the end of time. “Let us thank God for what He has done for us bringing us out from the pit of darkness to His everlasting light,” he added.
He said this was the time for all to revisit His story.
Women Secretary Chang Baptist Lashong Thangyen Rev. Noksen Ngamen and Mission Secretary Konyak Baptist Bumeinok Bangjum Rev. Dr. Poangba Konyak read the bible while Sesquicentennial Celebration Choir and Children’s Choir (Bright morning Star Children’s home) presented messages through songs.
Co-chair of the Sesquicentennial Celebration planning committee Rev. Dr. Rachülie Vihienuo delivered the salutation and former NBCC general secretary Rev. Zhabu Terhüja proposed the benediction prayer.
Earlier, a short documentary was also shown on the history of Christianity in Naga hills. To mark the 150 years of Christianity in Nagaland, a souvenir was also released on the occasion by Rev. Dr. Atsi Dolie, executive secretary Angami Baptist Church Council(ABCC).
The opening event also witnessed welcome and call to worship by N. Tialemba Phom, vice president NBCC, worship through songs by sesquicentennial celebration worship team and choral presentations.