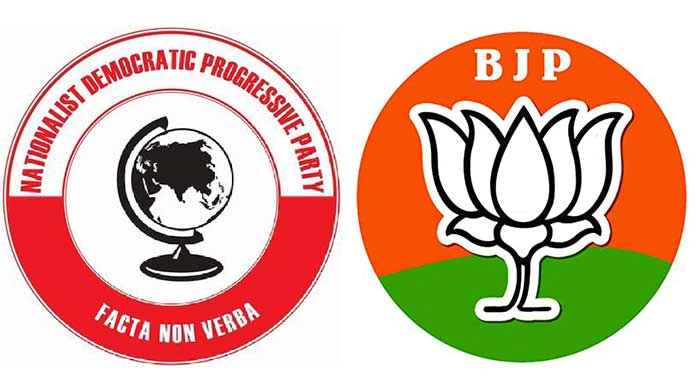 After two days of closed-door meetings between Union Home Minister Amit Shah and Nagaland chief minister Neiphiu Rio in Delhi, the seat-sharing deal between the Nationalist Democratic Progressive Party (NDPP) and the Bharatiya Janata Party (BJP) was finalised on Thursday, a News18 report stated.
In the series of meetings, where North East Democratic Alliance (NEDA) convenor and Assam chief minister Himanta Biswa Sarma was the main coordinator, the final deal was sealed at a 40:20 ratio.
After finalising the deal, Sarma said, “today we are finalising the seat sharing with NDPP for the Nagaland Legislative Assembly polls. BJP will contest 20 and NDPP will contest 40 seats in Nagaland. We finalised the seats where BJP will contest.”
A senior BJP functionary, while confirming about the finalisation of the 40 (NDPP):20(BJP) seat sharing in Delhi, disclosed to Nagaland Post that the tickets would be issued based on winnability and not as per 2018 seat arrangements.
“There will be re-adjustment of seats, which will be done based on winnability and not district-wise or tribe-wise. It is also very clear that the party will not go as per the 2018 assembly constituency allotment of tickets,” the BJP leader said.
A day after the Election Commission declared election dates for Tripura, Meghalaya and Nagaland, Sarma revealed the party’s strategy for the three states. Sarma has been camping in Delhi and strategizing for the party with other regional parties, NDTV reports stated.
Of the three states, the BJP has been able to form an alliance only in Nagaland. In Meghalaya, the BJP will go solo and in Tripura it is in informal talks with royal scion Debbarma’s Tipra Motha. Debbarma on Thursday held a closed-door ‘informal’ meeting with Sarma in Delhi and was said to have discussed the issue of Greater Tipraland.
“Pradyot Debbarma met me informally but for Tripura there is a different set of leaders who are looking at alliances. In Meghalaya, we have decided to fight solo, so we are not forming any alliance. In Tripura, the Tipra Motha is actually not part of the BJP-led NEDA,” Sarma said.
“We have held a meeting with NEDA convenor Himanta Biswa Sarma in Delhi and I have clearly said that we would not compromise with Greater Tipraland demand. In the past we have said we will form an alliance with any national party if they give written assurance of a constitutional solution to the greater Tipraland demand,” Debbarma told NDTV.
“We will be contesting in 40-45 seats. We cannot negotiate on the Greater Tipraland issue for any post or alliance until our people are given assurance in writing for a constitutional solution under Article 2 and 3 for Greater Tipraland,” he said.
The ruling alliance in Nagaland, led by the NDPP and the BJP is uniquely situated with no Opposition in the 60-member Assembly, but it has other political challenges.
Nagaland Pradesh Congress Committee president K Therie said the party will contest all the 60 seats but did not rule out a post-poll alliance with the Naga People’s Front (NPF) and other “like-minded and secular” parties.
On the other hand, NPF has made its stand clear that the party will not enter into pre-poll alliance, but will work towards building understanding with all political parties for any post-poll alliance.
Disclosing this to Nagaland Post on Wednesday, NPF Legislature Party Leader, Kuzholuzo (Azo) Neinu said NPF has also formulated a policy/strategy called “Pre-poll understanding for Post-Poll alliance”. Azo said this was also shared by party president Shürhozelie Liezietsü when Congress leaders visited him recently.
The National People’s Party (NPP), which won two seats in its debut in 2018, was also looking to put up a strong fight by contesting in 10-15 seats.

India highest attacked country by hackers in Asia in 2022

Debbarma refutes allegation that Tipra has pact with Cong & CPI(M)