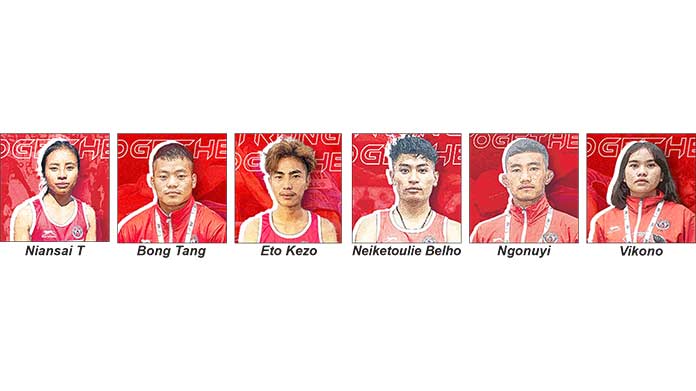 Nagaland won six more gold medals (three in wrestling) and (three in athletics) on Monday at the ongoing 2nd North East Olympic Games 2022 in Shillong, Meghalaya.
Wrestlers from Nagaland have so far won 5 medals in wrestling event with three gold, one silver and one bronze medal. Wrestler Vikono won gold medal in 53 kg for women’s category, Bongtang with gold in 57 kg and Ngonuyi gold medal in 61 kg for men’s category.
While Nosezono secured silver medal for 50 kg and Vizoseno got bronze medal 59 kg both for women’s category.
In athletics, Nagaland on Monday won three golds. 24-year-old Neiketoulie Belho secured his first gold medal for Nagaland in the long jump event. He gave Nagaland the 7th gold medal with a leap of 7.09 in men’s long. He bettered his own record 6.71 metres that won him the gold medal in Nagaland Olympic Games.
Niansai T secured two gold medals for Nagaland in 800m and 1500-meter race for U-20 women category. In 800m U-20, it was an easy win for her with a huge gap between the other opponents that secured her the gold medal.
In the 1500-meter race U-20, Cekrotalü took the lead until the last lap when Niansai T with her extra pace move ahead of her colleague and won the race.
Nagaland table tennis team secured two bronze medals. In men’s TT team event, Nagaland secured bronze medal. While, in open category men’s doubles, Kelhouravi Vivian Rutsa and Ricky Hinglak secured bronze medal for Nagaland. This is the first time, that men’s team have won a medal after decade in Northeast event.
In badminton, Nagaland badminton team secured four medals (one silver and three bronze). In women’s double, Ekumyala and Debahuti Lahon won the silver medal and in women’s singles, Debahuti Lahon added a bronze medal for Nagaland team.
While H. Leihong Konyak got bronze medal in men’s singles and in mixed doubles, Zhakuo Seyie and Tovali Shohe got bronze medal for Nagaland badminton team.
Nagaland Wushu team secured six bronze medals for Nagaland. The bronze medallists are Atokivi Chishi (56kg), Vipu Zhimomi (48kg), Limasunep Imchen (60kg), Mankho T Konyak (52 kg), Keheihingbe Lungalang (65kg) Rakesh Kumar (70kg).
Nagaland Taekwondo team won a total won a total of 10 medals (Gold – 3, Silver – 1, Bronze – 6). T. Tenloi Phom was the first person to get the first gold for Nagaland team in Taekwondo discipline of the under 45 kg junior category. He defeated Meghalaya in the first round by 16- 3, 15 – 5, defeated Sikkim in the semi-final with a score of 21 – 2, 10 – 4 and took gold against Assam in the final with a score of 17 – 14, 20 – 7.
A total of 16 players representing the Nagaland Taekwondo Association took part in the Olympics Games.
The gold medallists are Tenloi Phom (under-45 kg) junior category, Bovito Chophy (under 54 kg) senior category and Heuteinyi Zeliang (under 63 kg) senior category.
The silver medallist is Keneilevo Nagi (under 80 kg) senior category.
The bronze medallists are Hinglakpo Zeliang (under 48 kg), Nnumhei Zeliang (under 55 kg), Elizabeth Ezung (female under 49 kg) for junior category. Boto Chophy (under 68 kg) Ngaiching Phom (under 58 kg) Zakieneikho Peseyie (under 74 kg) for senior category.
Venuzo Dawhuo won gold medal and Seyiekhrietuo Yiese take bronze in shotput for Nagaland on Sunday. In the event, Dawhuo took the gold medal with his best performance of 13.06 m throw and his counterpart Yiese in 3rd place with 12.96m. The second position went to Manipur.