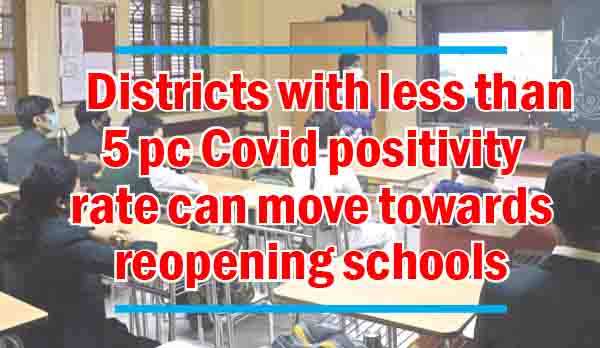 Central government on Thursday said the districts having less than five percent Covid positivity rate can move in the direction of reopening schools but it is up to the state governments to take a call in this regard.
Noting that the pandemic situation has improved and there has been a consistent decline in new COVID-19 cases, Niti Aayog Member (Health) V K Paul said we have more confidence now to go in the direction of reopening schools.
Ministry of Education (MoE) officials said schools are completely open in 11 states while they are reopened for mostly higher classes in 16 states. They said following the “extensive” vaccination coverage, the ministry had in December revised the guidelines issued to state for reopening of schools.
Schools continue to remain completely closed in nine states, officials said, adding that all the states have vaccinated at least 95 per cent of the teaching and non-teaching staff, while few states have achieved 100 percent vaccination coverage for them.
“The pandemic situation has improved. There are states and districts of concern, but overall there is a contraction in the spread of infection which is heartening. There are 268 districts where the positivity is below 5 per cent. And clearly, these districts can move in the direction of non-COVID care and also in the direction of other economic activities as well as school reopening,” Paul said at a press conference.
“The decision for reopening schools rests with the state governments, by the district administrations. But the broad issue is that we would still like to ensure that schools are opened and schools are run, according to protocols, standard operating procedures because we are still in the midst of the pandemic.
“By implementing Standard Operating Procedures (SOPs), we can ensure safe conduct of schools, make physical learning possible, school activities, which lead to interaction development, possible. Teachers can feel safe because now in any case, as they are vaccine protected. So following the SOPs is the essence of the guidelines that the Union government has been issuing. And we believe these guidelines are adapted, these are considered directly by the state governments and decisions are taken for opening the schools,” he added.
Noting that the nation is concerned that there have been a significant learning loss, Paul said schools should be open at the “earliest opportunity but also appropriate time”.
“It (school closure) had other imperatives in the absence of vaccine — the teachers were not protected, and so on and so forth… We have more confidence to go in the direction of reopening schools but according to the SOPs. We are very happy to share with you the the paradigm within which, in a scientific evidence, schools can be opened safely,” Paul said.
Sweety Changsan, Joint Secretary, Ministry of Education said after taking into account the extensive vaccination coverage, the ministry had issued revised guidelines to states in December last year and the decision to ask for parents consent was left with states.
“Also, the revised guidelines talked about congregations and gatherings which were earlier banned in schools.
According to the new advisory, schools may celebrate events and hold gatherings according to SOPs issued by the state.
States and UTs have also been advised to evolve SOPs for safe conduct for group activities and events,” she added.
Further, the revised guidelines issued by the Department of School Education and Literacy, Ministry of Education, suggested preparing bridge courses and implementing them in classrooms.
“Once school reopens, the grade-related syllabus should be undertaken only after the bridge course is completed, so that students can adjust to the changed school environment and do not feel the stress or being left out, especially students who did not have access to alternate means of education,” the guidelines had said.
“In the modified guidelines, the government has also suggested identification of children based on their learning levels so that teachers can focus on students who need additional support,” it added.

CPI(M), Cong trying to save themselves in Tripura: Nadda