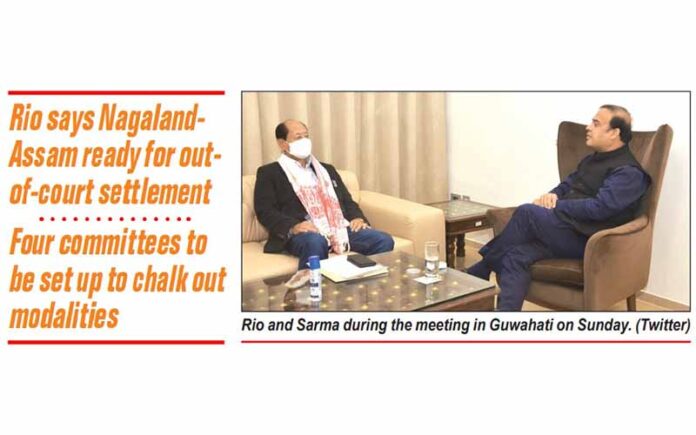 Nagaland Assembly select committee to examine the Nagaland-Assam border issue on Monday reiterated to resolve the longstanding border issue with Assam out of the court.
Sources informed Nagaland Post that during the meeting of the select committee, it was decided to constitute four committees to examine and workout the modalities. Each committee will comprise of the local legislators, government officials and civil society organizations. One committee will look into the border issue in Dimapur, Peren and Nuiland districts, one for Wokha, one for Mokokchung and one committee for Longleng and Mon districts, sources added.
Sources said that union home minister Amit Shah had categorically urged all the states in the region to solve their boundary disputes by August 15, 2022, when the country will be celebrating 75 years of its Independence.
Meanwhile, talking to media persons after the meeting, chief minister Neiphiu Rio informed that he, accompanied by deputy CM Y. Patton and NPF legislature party leader TR Zeliang, held a fruitful discussion with Assam chief minister on the border issue at the latter’s official residence in Guwahati on Sunday.
He said that both the states were prepared to settle the border issue amicably out of the court. “Both the state governments are in favour of an out-of-court settlement,” he stated.
Rio said that he and Sarma had also met Amit Shah in Delhi on December 23 last year to discuss about the border issue.
Therefore, in order to discuss the modalities, Rio said that a delegation, comprising of representatives from both Nagaland and Assam governments, would be meeting Shah in Delhi likely by next month. “Our delegations will meet Shah likely in the first week of February to discuss on how to go about it,” Rio said.
On the issue of royalty on petroleum and natural gas along the border, Rio said: “If we resolve the border dispute and the issue of royalty, it will be good for both sides as we are going to remain neighbours.”
No more district creation: Asserting that Nagaland state motto was “Unity”, Rio said it was not in the interest of the Nagas to further fragment the tribal population. Therefore, Rio reiterated that the state government had decided to not divide any tribal district that was already in existence.
“There are demands for division of Mon, Mokokchung, Zunheboto, Wokha and Phek districts. But fragmentation of tribal districts is not in the interest of Nagas. I appeal to various tribal organisations to understand this policy of the government for the welfare of Nagas as a whole,” he said.
FSL report awaited: Asked about the delay in getting the Central Forensic Science Laboratory (CFSL) report on the killing of 14 civilians by security forces in Mon district, the chief minister said that the Special Investigation Team (SIT) has completed the probe and is awaiting the forensic report.
“Without the CFSL report, the findings will be incomplete, and there will be no evidence or scientific proof to proceed further,” Rio said. Asked whether Nagaland will get a forensic laboratory, the chief minister said that he will take up the matter with Shah.
On R-Day boycott: On Konyak Union and Eastern Nagaland Peoples’ Organisation giving a call to boycott Republic Day celebrations in protest against the killings, Rio said they are asking the government only to hoist the Tricolour in public offices.
“They can say whatever they want in a democracy but the government will also do whatever it deems necessary,” he said.

Crackdown on child marriage to continue till 2026 Assam polls: Himanta