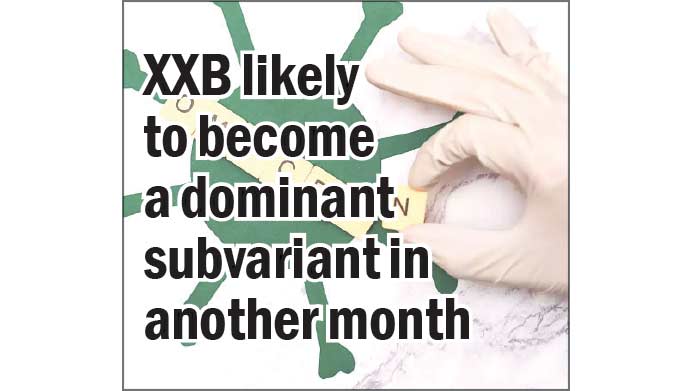 Omicron’s newly identified variant — XBB strain — is rapidly spreading in India, with Covid-19 cases caused by it nearly doubling in the last week, according to experts.
This strain, they added, could likely become a dominant subvariant in another month, The Times of India reported. In a span of nine days, 65 new cases of the variant were reported across the country. From October 14 to 23, the number of XBB Covid-19 cases jumped from 71 to 136.
XBB subvariant of Omicron is a recombinant virus, and is highly immune-evasive, which essentially means it can overcome the antibodies and hence cause another wave of infections.
Till now, eight states have reported cases, with Tamil Nadu having the highest number at 52. This is followed by 35 cases in Odisha cases, Maharashtra has 18 cases, West Bengal at 17 cases, Delhi and Karnataka each have 6, Gujarat has 2, while Rajasthan has a single case.
As of now, 20 per cent of Covid-19 cases have XBB strain in it, 7 per cent have the BA.2 strain, while 3 per cent have the BA.5, according to TOI. In fact, XBB is racing another Omicron subvariant BQ.11 to become the most immune-evasive variant this summer. The subvariant was first detected in Kolkata in August 2022, and it has spread to 26 countries till now. XBB is also the cause of fresh waves in Bangladesh and Singapore.
The World Health Organisation earlier this week warned of another wave of infections due to the XBB subvariant, PTI said.
Dr Soumya Swaminathan, chief scientist at the WHO said “there are over 300 subvariants of Omicron, and the one that is concerning right now is XBB, which is a recombinant virus. As the virus evolves it is going to evolve more and more transmissible.”
Swaminathan also said that currently there was no clinical data at hands to suggest that these subvariants are more severe.