Open Mopa Airport when work is complete, not to etch name of Chief Minister on stone: Goa Forward 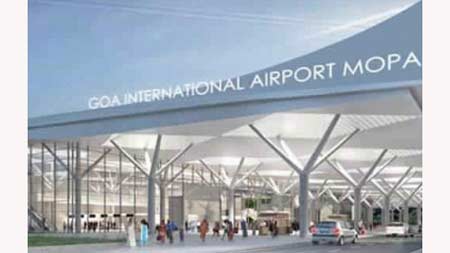 As Goa Chief Minister Pramod Sawant announced a new date to commission Mopa Airport after December 8, Goa Forward Party President Vijai Sardesai claimed that work of this airport is still under construction and hence should be opened only after completion of work.

“Open the airport when it is ready, not when Pramod Sawant is ready (for inauguration). Chief Minister’s undue haste in commencing operations at Mopa airport when clearly many areas are still under construction, will lead not only to inefficiency, disruption and risks but also to suspicions of coverups and misdeeds,” Sardesai, Fatorda MLA, said.

Alleging premature inauguration as a ploy, Sardesai said that Pramod Sawant’s rush to etch his name on (inauguration) stone at Mopa airport is to claim ownership of the project.

According to Sardesai, Mopa airport was not an initiative of Sawant, but it is getting completed in his tenure.

“People of Goa know his name is etched very clearly on Goa’s collapsed Law and Order, rising unemployment, and corruption,” he said.

The Goa government had initially planned to inaugurate the greenfield International airport at Mopa between August 15 to 30, however it was delayed.

Later, Sawant had said that work of Mopa International Airport in Goa will be completed by October 23 and later will be inaugurated by Prime Minister Narendra Modi.

Recently, Sawant said that Mopa airport will be commissioned after December 8.