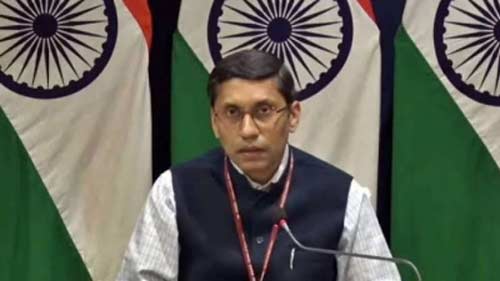 India has said that Pakistan must continue to take “credible, verifiable, irreversible and sustained” action against terrorism and terrorist financing emanating from territories under its control.

The remarks were made by Foreign Ministry spokesperson Arindam Bagchi in response to media queries on Pakistan’s removal from the grey list of the Financial Action Task Force (FATF) on Friday.

“It is in global interest that the world remains clear that Pakistan must continue to take credible, verifiable, irreversible and sustained action against terrorism and terrorist financing emanating from territories under its control,” Bagchi said in a statement.

“As a result of FATF scrutiny, Pakistan has been forced to take some action against well-known terrorists, including those involved in attacks against the entire international community in Mumbai on 26/11,” he added.

In a statement, the FATF announced that Pakistan is no longer subject to its increased monitoring process.

Pakistan was included among jurisdictions under the increased monitoring list in June 2018 for deficiencies in its legal, financial, regulatory, investigation, prosecution, judicial and non-government sectors in fighting money laundering and combat terror financing, which are considered serious threats to global financial system.

Islamabad made high-level political commitments to address these deficiencies under a 27-point action plan. But later the number of action points was enhanced to 34.

The country had since been working with FATF and its affiliates to strengthen its legal and financial systems against money laundering and terror financing to meet international standards in line with the 40 recommendations of the FATF, Dawn reported.

A 15-member joint delegation of the FATF and its Sydney-based regional affiliate – Asia Pacific Group – had paid an onsite visit to Pakistan from August 29 to September 2 to verify the country’s compliance with the 34-point action plan committed with the FATF.

The authorities, which kept the countrywide visit of the delegation low profile, later termed it “a smooth and successful visit”. The delegation had detailed discussions with the relevant agencies pursuant to the authorisation of an onsite visit by the FATF Plenary in June 2022.

Pakistan believed that as a result of “strenuous and consistent efforts over the past four years, it has not only achieved a high degree of technical compliance with FATF standards but also ensured a high level of effectiveness through the implementation of two comprehensive FATF action plans”.