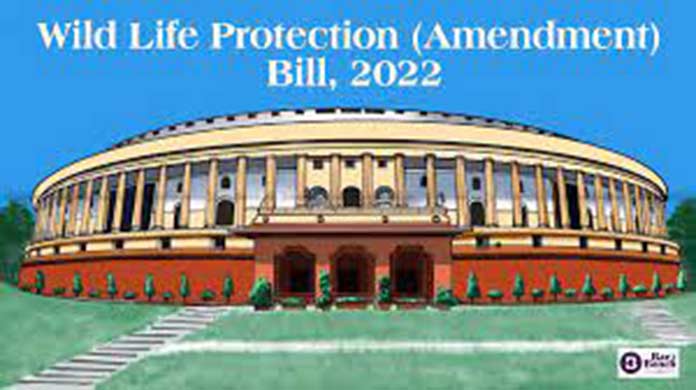 Parliament on Thursday passed the Wild Life (Protection) Amendment Bill which seeks better management of protected areas and also provides for certain permitted activities like grazing or movement of livestock and bona fide use of drinking and household water by local communities.
The bill was passed in Rajya Sabha by a voice vote.
Lok Sabha had cleared the legislation in August during the monsoon session.
Responding to a debate on the bill in the Upper House, Environment Minister Bhupender Yadav noted that while protecting the forest land is critical it is equally important to safeguard the rights of the people who have been residing there for ages.
He noted that the government has taken steps to increase green cover in the country since taking over the reins in 2014.
Yadav also said that the government is bound to protect wildlife, including elephants, according to provisions of the law.
While introducing the legislation, he had stated that there were two main objectives of the bill which includes bringing the international treaty that India has signed into the legal framework.
“Along with this, some level of protection to people living in forest area for their livestock and traditional rights was necessary till the time they are completely relocated,” Yadav had stated.
The Wild Life (Protection) Amendment Bill, 2021, which had undergone scrutiny of a parliamentary panel, seeks to conserve and protect wildlife through better management of protected areas and rationalise schedules which list out species under the Wild Life (Protection) Act, 1972.
During the discussion on the Bill, Congress Rajya Sabha member Kumar Ketkar alleged that real estate sharks and corporates were devastating jungles, and were using their money, muscle power and connection in the bureaucracy so that no action is taken against them.
Another Congress member Jairam Ramesh opposed the bill in “its present form” and expressed apprehension over the provision related to transfer or transport of any live elephant “for any other purpose” in the Bill as it could be misused, while asking the minister to specify the purpose in the Act.
Sushmita Dev (AITC) also expressed similar sentiments in her speech and asked the minister to tell the Parliament on why the government did not vote against the motion for restarting of international ivory trade.
Shiv Sena member Priyanka Chaurvedi said National WildLife board is being diluted from 15 members to three.
On the other hand, Praful Patel (NCP) supported the bill but drew attention to the need to strike a fine balance between protection of wildlife and growth as man-animal conflict has been growing.
During the discussion, Aam Aadmi Party member Sanjay Singh expressed apprehension around the poaching of the party’s winning candidate in the Municipal Corporation of Delhi election and said besides wildlife conservation, there is a need to protect humans as well.
“Now we have concerns about human species. We have won an election in MCD. Learnt that there is preparation going on to pick them up. They are openly saying human species will not be protected, saying the Mayor will be ours. Therefore I am saying protection of human species, rights of state is the responsibility of the central government. You attempt to snatch rights of states by bringing such bills and misusing Raj Bhawan, governor and LG should be stopped,” Singh said.
BJP leader Tajinder Pal Singh Bagga on Wednesday afternoon tweeted in Hindi that once again Delhi will get “a BJP mayor”.
According to the statement of objects and reasons of the bill, the Wild Life (Protection) Act, 1972, was enacted to provide for the protection of wild animals, birds and plants with a view to ensure the ecological and environmental security of the country.
The bill also seeks to include the aspects of “conservation” and “management” of wildlife which are covered by the Act and make amendments for better management of protected areas.
It proposes to rationalise and amend the schedules, which list out wildlife species, for the purposes of clarity, and ensure better care of seized live animals and disposal of seized wildlife parts and products.
The bill further seeks to enable control of invasive alien species and allow for transfer or transport of live elephants by person having ownership certificates in accordance with conditions prescribed by the central government.
It also proposes to insert a new Chapter VB in the principal Act for regulation of international trade in endangered species of wild fauna and flora and allow state boards for wildlife to constitute standing committees.
India is a party to the Convention on International Trade in Endangered Species of Wild Fauna and Flora, which requires that appropriate measures are taken to enforce the provisions of the convention.

India’s focus should be on reducing dependence on China: Suman Bery