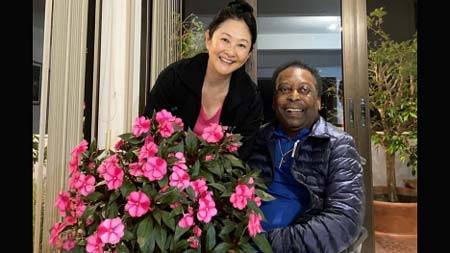 Brazilian football legend Pele has moved to reassure fans that he is in good health as he continues his fight against cancer.

The 81-year-old posted a photo on social media in which he is seen smiling alongside his wife Marcia Aoki at their home in Guaruja, outside Sao Paulo.

“I’m sending this photo to you, just to say thank you,” he said in a message accompanying the image, reports Xinhua. “I am so grateful for having my wife with me, for the laughter, for the peace of my home, and for all your loving messages. I am doing very well and taking care of my health.”

The three-time World Cup winner has undergone several sessions of chemotherapy in Sao Paulo since having a tumour removed from his colon last September.

In February, he spent more than two weeks in hospital due to a urinary tract infection.

Widely regarded as one of the greatest players of all time, Pele scored a world record tally of 1,281 goals in a 1,363-match professional career that spanned 21 years.

He was capped 91 times for Brazil, scoring 77 international goals.