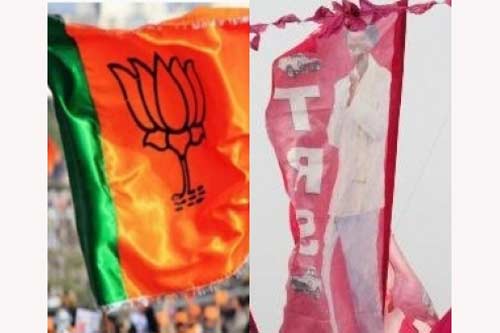 The poaching drama that unfolded in Hyderabad on Wednesday night has triggered a slugfest between the ruling Telangana Rashtra Samithi (TRS) and Bharatiya Janata Party (BJP).

After three persons, including two godmen, were detained from a farmhouse near Hyderabad while trying to lure four MLAs of TRS with offers of huge sums of cash, important positions and contracts, the TRS accused BJP of trying to destabilise the state government and called it an attack on self-respect of Telangana.

As word spread about a police raid on the farm house and those detained being close to the BJP leaders, TRS leaders, including ministers took to streets in different parts of the state to stage a protest against the saffron party. They staged a road blockade and raised slogans against Prime Minister Narendra Modi.

Those detained at the farmhouse are Ramachandra Bharati alias S. Satish Sharma from Delhi and Simhayajulu from Tirupati, both godmen and Nanda Kumar, a businessman from Hyderabad said to be close to a Union minister.

The TRS leaders alleged that the BJP was trying to topple the government in Telangana just as it did in Maharashtra, Karnataka, Madhya Pradesh and other states by luring the MLAs with cash, important positions and contracts.

The ruling party alleged that each MLA was offered a deal to the tune of Rs 100 crore. Some of the TRS leaders posted on Twitter photographs of the accused with top BJP leaders, including Union ministers Rajnath Singh, G. Kishan Reddy and Uttar Pradesh Chief Minister Yogi Adityanath.

The saffron party hit back at TRS for what it calls insulting Hindu dharma by pointing fingers at godmen.

State BJP chief Bandi Sanjay Kumar alleged that the ‘story, screenplay and direction’ at Moinabad farmhouse is by Chief Minister K. Chandrasekhar Rao. “It has boomeranged. TRS are complainants, TRS are victims and TRS are criminals,” he said.

He dared CM KCR to come to Yadadri Lakshmi Narasimha Swamy temple and swear that he has not ‘scripted this story’.

He slammed KCR for dragging priests into the episode and alleged that he was attempting to taint the image of Hindu dharma.

The BJP leader also wanted to know why the police did not record the statements of the MLAs. “Why weren’t they taken to the police station but left to Pragati Bhavan. What were MLAs gunmen doing,” he asked.