Protesters against VSP privatisation held during PM’s visit to Vizag 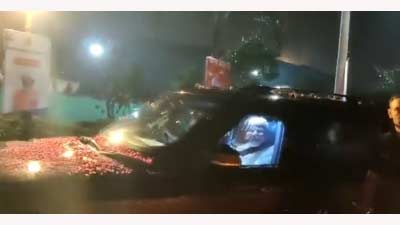 Police in Visakhapatnam on Saturday took leaders and members of the Visakhapatnam Ukku Parirakshana Porata Committee (VUPPC) and the Left parties into preventive custody in view of Prime Minister Narendra Modi’s visit to the city.

VUPCC, which is spearheading the movement against the Centre’s move to privatise Visakhapatnam Steel Plant (VSP), has called for protests during the Prime Minister’s visit.

VUPCC has called for three-day protests to demand the Centre to drop its move to privatise the plant.

As part of this, a number of programmes have been lined up for Saturday, including a meeting at the gate of the plant.

The police on Friday arrested some leaders and members of VUPCC and employees of VSP when they staged a sit-in against the privatisation of the plant.

The organisation has called for a mass boycott of the work and urged employees to join the sit-in.

Some employees participated in the protest along with their family members. Carrying placards, they demanded that Prime Minister Modi announce withdrawal of the move to privatise the plant.

They said the privatisation would deal a blow to the interests of hundreds of workers and their families.

The police arrested about 50 protesters, including leaders of VUPCC and the Left parties.

VUPCC chairman Narasinga Rao slammed the YSR Congress Party government for the arrests and questioned the action of the latter which had earlier declared support to the agitation against privatization.

Akshay Kumar could return to ‘Hera Pheri’ universe as Raju