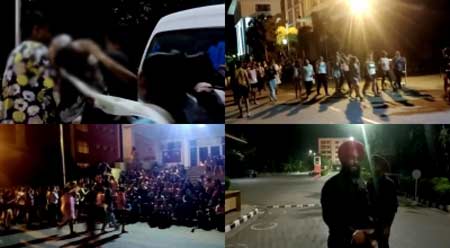 Describing the incident of the alleged video leak from girls’ hostel in a private university as unfortunate, Punjab Chief Minister Bhagwant Mann on Sunday ordered a high-level probe into the incident.

The Chief Minister said the daughters “are our dignity and pride adding that any such incident is highly condemnable”.

Mann said he “is peeved to learn about the entire matter and has asked the district administration to undertake in-depth enquiry about the incident”.

He categorically said anyone found guilty will not be spared and severest of severe action will be taken against the perpetrators of this heinous crime.

Earlier, there were reports that the accused girl student had made videos of some women students and sent those to a youth in Shimla, who allegedly uploaded them on social media.

The girl student was apprehended and an investigation into the matter was underway.

Senior Superintendent of Punjab Police Vivek Soni told the media, “As per the investigation, the accused made her own video and no video of other students was made. There was no evidence so far. There is so much misinformation and rumours doing rounds. We should respect the modesty of the accused student as we are investigating the matter.”

The Chief Minister said that he is in constant touch with the district administration and is keeping a tab on the entire situation.

Mann urged the people to not get swayed away with the rumours being spread by some anti-social elements. He also warned that strict action will also be taken against those who are spreading canards regarding this sensitive issue.

Indian-Americans in California protest against BBC series on Modi