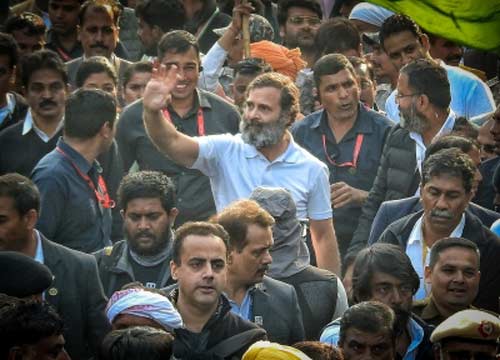 The Central Reserve Police Force (CRPF) said that necessary security arrangements were made for Rahul Gandhi as per the guidelines, but he violated the rules 113 times and was duly informed of the same.

CRPF deployed in Gandhi’s security responded to the question raised by the Congress regarding the lapse in his security and the letter written by the party to the Ministry of Home Affairs (MHA).

The CRPF, in its reply submitted to the MHA, said that Gandhi violated the fixed security instructions several times since 2020, including during Bharat Jodo Yatra.

It added that the violations had been brought to the leader’s notice from time to time.

According to CRPF, the arrangements were made in coordination with the state police and security agencies, after advanced communication regarding security before each tour, in addition to Advanced Security Liasion (ASL) that was done for Gandhi’s security before the Yatra entered Delhi.

According to CRPF, the Delhi Police informed that security personnel were deployed adequately, and that the security arrangements made for the protectee work when the person himself follows the prescribed guidelines.

The Congress demanded for Gandhi’s security in Bharat Jodo Yatra from the Central Government.

Congress General Secretary, K.C. Venugopal had written a letter to Home Minister Amit Shah regarding the same, wherein he claimed of lapses in Gandhi’s security in the Delhi leg of the Yatra.

The Intelligence Bureau has questioned many people involved in the yatra in this regard.