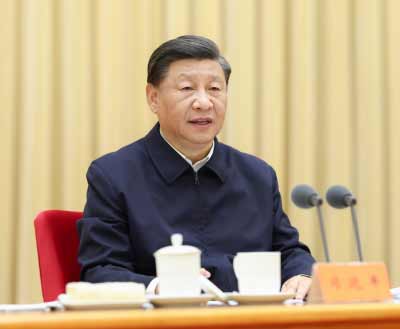 A rare protest against Chinese President Xi Jinping and his policies swiftly ended in Beijing Thursday, just days before he is set to secure a third term in power at a key meeting of the ruling Communist Party.

Photos circulating on Twitter showed two banners hung on an overpass of a major thoroughfare in the northwest of the Chinese capital, reports CNN.

“Say no to Covid test, yes to food. No to lockdown, yes to freedom. No to lies, yes to dignity. No to cultural revolution, yes to reform. No to great leader, yes to vote. Don’t be a slave, be a citizen,” reads one banner.

The photos also show plumes of smoke billowing from the bridge.

Public protest against the top leadership is extremely rare in China, especially in the run-up to important political meetings, when authorities turn Beijing into a fortress to maintain security and stability, CNN said in its report.

The twice-a-decade Communist Party national congress is the most important event on China’s political calendar.

At the 20th Party Congress beginning on Sunday, Xi is widely expected to break with recent norms and extend his rule for another term, potentially paving the way for lifelong rule.

Xi, the most powerful and authoritarian Chinese leader in decades, has waged a sweeping crackdown to crush dissent, both within the party and in wider society.

His draconian zero-Covid policy has fueled growing public frustration, as rolling lockdowns upend lives and wreak havoc on the economy.

Russian troops sent to eastern Ukraine ahead of planned offensive