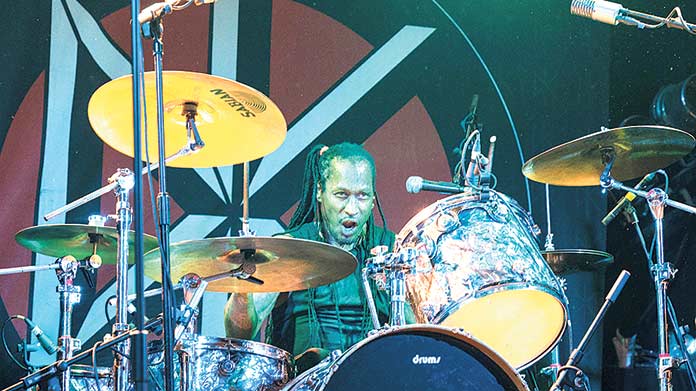 Red Hot Chilli Peppers drummer DH Peligro has died aged 63. The musician, born Darren Henley, hit his head in a fall at his home in Los Angeles and died shortly after on Friday (28.10.22), with his passing confirmed on Saturday.
After his brief stint with the Red Hot Chilli Peppers in 1988, he went on to join The Dead Kennedys, who announced his passing online by saying: “Dead Kennedys’ drummer D.H. Peligro (Darren Henley) passed away in his Los Angeles home yesterday, Oct 28th.
“He died from trauma to his head from an accidental fall. Arrangements are pending will be announced in the coming days.
“Thank you for your thoughts and words of comfort.”
Darren replaced the original drummer of The Dead Kennedys in 1981 and stayed with the group until their break up in 1986, before taking over from drummer Jack Irons in the Red Hot Chilli Peppers two years later.
He wrote songs on the group’s fourth album ‘Mother’s Milk’, though did not perform on it and was fired from the band in November 1988 and was replaced by its current drummer Chad Smith.
Darren also performed with bands such as The Hellations, Jungle Studs, Nailbomb, The Feederz, Lock-Up, The Two Free Stooges, Reverend Jones and SSI and fronted his own band Peligro, with whom he released three albums.
Red Hot Chilli Peppers bassist Flea said on Instagram alongside a black and white picture of Darren: “My dear friend, my brother I miss you so much. I’m devastated today, a river of tears, but all my life I will treasure every second. “The first time I saw you play with the DK’s in ‘81 you blew my mind. The power, the soul, the recklessness.
“You became my beloved friend, so many times of every kind. We had so much fun, so much joy, having each other’s backs.
“I love you with all my heart. You are the truest rocker, and a crucial part of rhcp history.