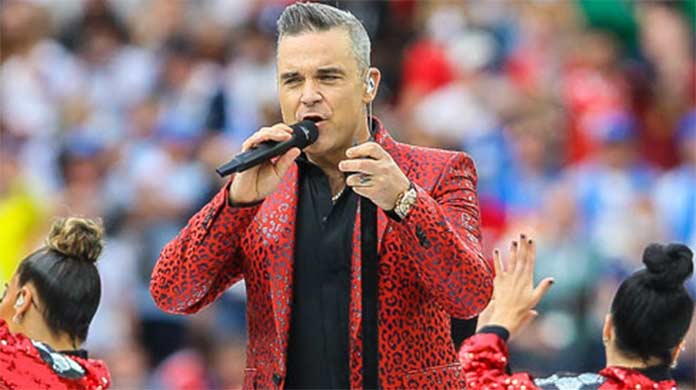 Robbie Williams has announced two “unique” concerts at the Royal Albert Hall.
The 44-year-old pop star will take to the stage at the historic London venue for two nights 6 an7 November to perform some of his biggest hits in an exclusive “never to be repeated” events which is to be filmed for the upcoming biopic ‘Better Man’ and the scenes will emulate his 2001 concert ‘Live at the Royal Albert Hall.’
A press release said: “The concerts will take place on 6th and 7th November for two sensational nights of music at the iconic venue, where Robbie will perform a mixture of swing classics and some of his biggest hits.
“As well as the chance to enjoy a unique concert from one of music’s most celebrated performers, the show is an unmissable opportunity for Robbie fans to be a part of a major cinematic release.
‘The ‘Rock DJ’ hitmaker – who is married to former ‘Loose Women’ star Ayda Field and has Theodora, nine, Charlton, seven, Coco, three, and two-year-old Beau with her – will be played on screen by Jonno Davies but the exclusive event will see the former Take That star give fans the “unique opportunity” to see him in the only film ever made about his life.
The statement added: “The new shows are a unique opportunity for fans to be a part of the only Robbie Williams film ever to be made and in a further nod to the swing era, the dress code is strictly black tie.”.
‘Better Man’ began filming in Australia earlier this year and is set for release in 2023.
Tickets for the Royal Albert Hall shows are available from 9am BST this Thursday 27 October via a pre-sale on the official Robbie Williams store.
General sale tickets are available from 11am BST on Thursday 27 October. (Contactmusic)