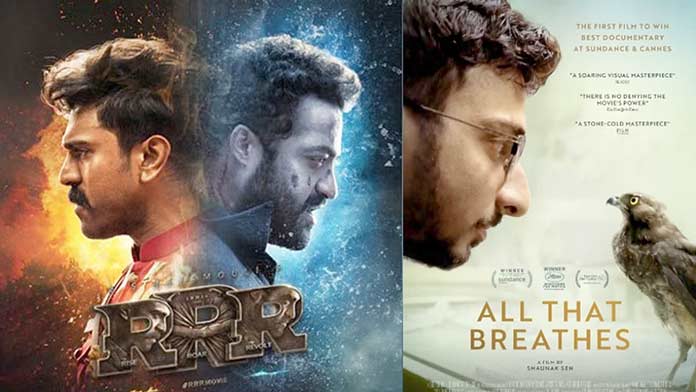 Making for an exciting awards season for India, S S Rajamouli’s period action blockbuster “RRR” and Shaunak Sen’s celebrated documentary “All That Breathes” have made it to the BAFTA Film Awards longlist, the organisers said on Friday.
This is the initial longlisting round and the films will advance to the nominating stage of voting, the British Academy of Film and Television Arts said in a press release shared on the official website.
“RRR”, India’s biggest global hit of 2022, has already made it to the best music (original song) Oscars shortlist and is also nominated for two Golden Globes — best picture, non-English language and the best original song for the Telugu track “Naatu Naatu”. Besides, it has four Critics Choice Award nominations – best picture, best foreign language film, best song and best visual effects.
“RRR” finds mention in the BAFTA longlist for a ‘film not in English language’ category. It shares space with “All Quiet on the Western Front”, “Argentina, 1985”, “Bardo, False Chronicle of a Handful of Truths”, “Close”, “Corsage”, “Decision To Leave”, “EO”, “Holy Spider”, and “The Quiet Girl”.
The 10 films will compete to secure a place in the final five for the BAFTA Award. Forty-nine films were submitted for consideration in the category.
“RRR” , a pre-independence fictional story, follows two real-life Indian revolutionaries – Alluri Sitarama Raju (Ram Charan) and Komaram Bheem (Jr NTR) – in the 1920s.
Sen’s acclaimed “All That Breathes”, an internationally co-produced Hindi title, is also vying for a spot in the top five of the documentary category.
The documentary will advance to the final round of nominations with “All the Beauty and the Bloodshed”, “A Bunch Of Amateurs”, “Fire of Love”, “The Ghost of Richard Harris”, “Hallelujah: Leonard Cohen, a Journey, a Song”, “Louis Armstrong’s Black & Blues”, “McEnroe”, “Moonage Daydream” and “Navalny”.
The Delhi-based movie follows two siblings, Mohammad Saud and Nadeem Shehzad, who have devoted their lives to rescuing and treating injured birds, especially black kites.
“All That Breathes” previously won the World Cinema Grand Jury Prize: Documentary at this year’s Sundance Film Festival, a film gala that promotes independent cinema and filmmakers, and earned the Golden Eye award for the best documentary at the 2022 Cannes Film Festival.
“The publication of the BAFTA Film Awards Longlist is a very special moment to recognise the wide range of exceptional crafts, performances and productions that make the magic of films a reality.
“To be Longlisted is a fantastic achievement amidst the phenomenal films released in the last year. Sharing the list ahead of the Nominations will hopefully inspire the public to watch as many films as possible and join in the conversation as excitement builds for the Awards,” BAFTA Film Committee Chair Anna Higgs said in a statement.
On Wednesday, Rajamouli received his best director trophy at the New York Film Critics Circle (NYFCC) Awards.
The final nominations for the BAFTA Film Awards will be announced on January 19 via a global livestream hosted by actors Hayley Atwell and Toheeb Jimoh. The award ceremony will take place on February 19 at the Southbank Centre’s Royal Festival Hall.
The organisers on Friday unveiled the longlist in 24 categories, including best film, cinematography, casting, documentary, film not in English language and documentary feature film.