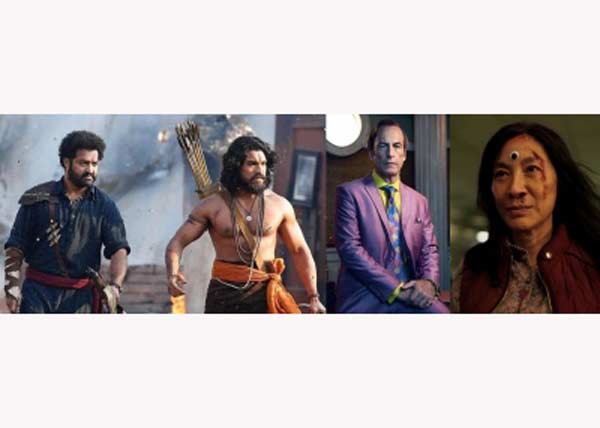 After winning a Golden Globe for ‘Naatu Naatu’, S.S. Rajamouli’s epic drama ‘RRR’ won Best Foreign Language Film and walked away with the Best Song trophy for the number that has made the world fall in love with the Ram Charan-NTR Jr hook step.

At the 28th Critics Choice Awards, which took place on Sunday night (U.S. Pacific Time) at the Fairmont Century Plaza in Los Angeles, also saw Rajamouli invoke ‘Mera Bharat Mahan’ and get taken by surprise by James Cameron, the creator of ‘Avatar’, when he said that he had seen ‘RRR’ twice.

‘Everything Everywhere…’ came into the ceremony with a leading 14 nominations and left leading all films and TV shows with five trophies, including Best Director for Daniel Kwan and Daniel Scheinert, the duo who are better known as the Daniels.

The screenplay awards went to Kwan and Scheinert for ‘Everything Everywhere’ (Original) and Sarah Polley for MGM/United Artists ‘Women Talking’ (Adapted).

On the TV side, FX’s ‘Breaking Bad’ prequel ‘Better Call Saul’ won Best Drama Series for its sixth and final season, and its star Bob Odenkirk won Best Actor in a Drama. And Zendaya picked up more Best Actress hardware for HBO’s ‘Euphoria’.

ABC’s Abbott Elementary followed its Golden Globe win with the Critics Choice Award for Best Comedy Series. Jeremy Allen White won Best Actor in a Comedy Series for FX’s The Bear, and Jean Smart who missed the ceremony because of Covid was named Best Actress for HBO Max’s Hacks.

A24 and the combined HBO/HBO Max topped all networks and distributors with six trophies each, followed by Netflix with five. Disney and AMC got three each. ABC, Apple TV+, Disney, Focus Features, Hulu, Paramount, Roku Channel and Variance Films (‘RRR’) were the only other multiple winners.