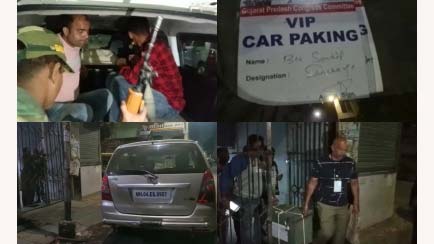 The Static Surveillance team has recovered Rs 75 lakh in cash from a car here days before Gujarat goes to poll in two phases — December 1 and 5, sources said on Wednesday.

On Tuesday night, the team intercepted a car with three occupants and on searching, it found Rs 75 lakh in cash. While two persons — Uday Gurjar and Mohammad Faiz — were detained and questioned by the police, the third — Sandeep — managed to escape.

Income Tax department will be joining the investigation.

Though the Surat police did not issue any statement regarding the seizure, sources from the department said that the car occupants had collected Rs 75 lakh in cash from one R.R. Angadia Pedhi and were returning when the surveillance team intercepted their vehicle.

While searching, the team found leaflets on Congress Rahul Gandhi’s Surat rally from the vehicle besides a VIP car pass bearing the name of B.M. Sandeep, the AICC secretary and in-charge of South Gujarat region of Congress, triggering a political slugfest.

BJP media coordinator Yagnesh Dave said that the recovery of Congress leaflets indicates the involvement of a Congress leader. There are all chances that the cash also belongs to Congress, he alleged, adding that investigation will reveal whose money is it and the reason for such huge amount being transported in Surat.

Refuting the allegations, Surat Congress leader Naisadh Desai termed it a “conspiracy” to frame his party.

Another party spokesman Hemang Rawal asserted that there is no evidence to prove that the cash belongs to the Congress. “Let the investigation unveil the truth,” he said, adding that his party has full faith in law of land.