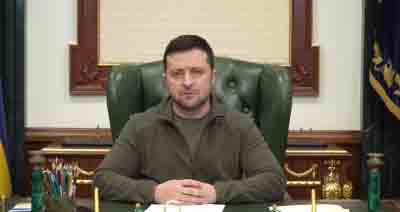 Ukraine President Volodymyr Zelenskyy has insited that his country will restore all educational institutions destroyed in Russian strikes but the Russian society will remain crippled for generations to come.

In a video address late Friday, the Ukraine President said, two universities – the pedagogical and shipbuilding – were destroyed in the Russian strikes.

“There are no such words in normal human language that can describe the condition to which the Russian state has degraded. It is a double crime – to destroy pedagogical universities so that there won’t be educational institutions and new educators cannot be trained… But let the terrorists not hope that it will give them anything,” Ukrainska Pravda quoted President Zelenskyy as saying.

“We will definitely restore everything that they destroyed, each of the more than 2,000 educational institutions, all kindergartens, all schools, institutes, universities. And most importantly, we will preserve our humanity and our civility. But Russian society, with so many murderers and executioners, will remain crippled for generations, and through its own fault,” he claimed.

Several blasts were heard in Mykolaiv city on Friday. The Russians strikes hit two universities, in which two people were injured.

Previous article
Pakistan has assured IMF it will try to get concessions from Chinese power plants
Next article
Islam in China must be Chinese in orientation: President Xi Jinping
Share
Facebook
Twitter
Pinterest
WhatsApp
Must Read