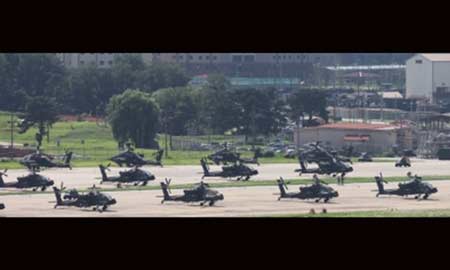 The Ulchi Freedom Shield (UFS) exercise is set to run through September 1, involving an array of contingency drills, like concurrent field manoeuvers that were not held over the past years under the former Moon Jae-in administration’s drive for peace with Pyongyang, reports Yonhap News Agency.

The allies have kept up vigilance against the possibility of Pyongyang undertaking provocations on the pretext of reacting to their exercise, which the recalcitrant regime has decried as a war rehearsal.

Under an all-out war concept, the exercise consists of two parts — the first segment involving drills on repelling North Korean attacks and defending the greater Seoul area, with the second part focusing on counterattack operations.

During the first segment, the Seoul government will concurrently hold the Ulchi civil defence drills for four days, including those practicing transitioning to a wartime support mode.

The UFS will incorporate drills for various real-life scenarios, including the discovery of improvised explosive devices at nuclear power plants, a fire at a semiconductor factory, paralysis of a banking network, terrorism at airports and drone attacks, according to the Defence Ministry.

During the exercise, the allies plan to conduct 13 combined field training programs.

The FOC assessment is the second part of the three-stage program designed to vet Seoul’s capabilities to lead the allies’ combined forces.

The programme is part of various conditions required for the OPCON handover.

To prevent the spread of Covid-19, the two sides have put in place a set of strict antivirus measures, such as requiring troops to take virus tests before joining the exercise and wear face masks.