S.Korea’s trade chief to visit US for talks on Inflation Reduction Act 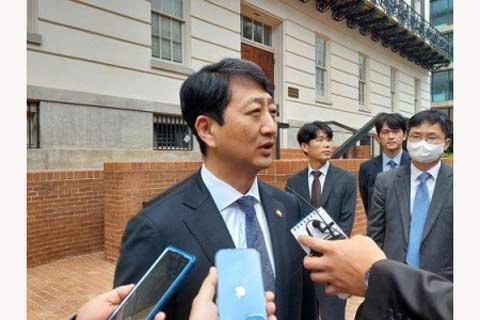 South Korea’s Trade Minister Ahn Duk-geun will visit the US for talks on the US Inflation Reduction Act (IRA) that excludes electric vehicles assembled outside North America from tax incentives, the Ministry said on Sunday.

Ahn is set to hold meetings with US Trade Representative Katherine Tai, John Podesta, the senior Adviser to the US President for Clean Energy Innovation and Implementation, as well as US lawmakers during a five-day visit that begins on Monday, according to the Ministry of Trade, Industry and Energy.

The IRA, signed by US President Joe Biden in August, gives up to $7,500 in tax credits to buyers of electric vehicles assembled only in North America.

The act has sparked concerns that Hyundai Motor and Kia Corp. could lose ground in the US market, as they produce EVs at domestic plants for export to the US, and South Korea has strongly voiced the need to create exceptions for Korean-made EVs.

On Thursday, US President Joe Biden acknowledged that the law may have “glitches” during a joint press conference with French President Emmanuel Macron, according to foreign media reports.

Meanwhile, Lee Jae-myung, the Head of the main Opposition Democratic Party, said he has sent letters to Korean Americans in the US Congress, asking for their help to revise the IRA.

In the US midterm elections last month, four Korean Americans — Andy Kim, Young Kim, Michelle Steel and Marilyn Strickland — were elected to the US House of Representatives.

“Roles of Korean American lawmakers, who have contributed to the Seoul-Washington relations, became more important than ever,” Lee wrote on Facebook.

“In the letter, I explained to them that concerns over the IRA should be resolved in a reasonable way.”