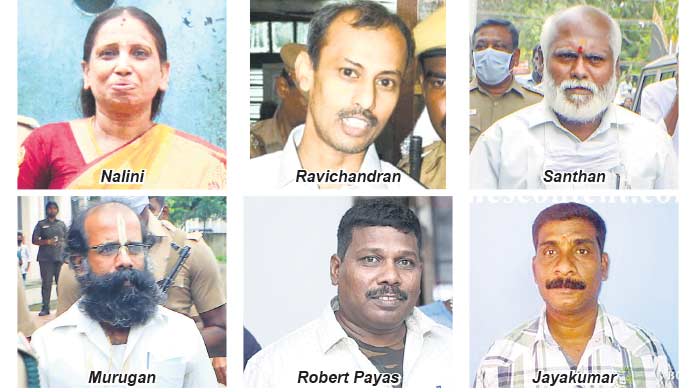 The Supreme Court on Friday directed the premature release of six convicts, including Nalini Sriharan and RP Ravichandran, serving life term in the assassination case of former Prime Minister Rajiv Gandhi, noting that the Tamil Nadu government has recommended remission of their sentence.
Besides Nalini Sriharan and Ravichandran, the four others to be released are Santhan, Murugan, Robert Payas and Jayakumar.
The Supreme Court also took into account that their conduct was satisfactory during incarceration and they have undertaken various studies.
A bench of justices B R Gavai and B V Nagarathna said the judgement of the top court in the case of AG Perarivalan, one of the convicts in the case, is equally applicable in their matter.
Invoking its extraordinary power under Article 142 of the Constitution, the top court had on May 18 ordered the release of Perarivalan, who had served over 30 years in jail.
Gandhi was assassinated on the night of May 21, 1991 at Sriperumbudur in Tamil Nadu by a woman suicide bomber, identified as Dhanu, at a poll rally.
In its May 1999 order, the Supreme Court had upheld the death sentence of four convicts Perarivalan, Murugan, Santhan and Nalini.
However, in 2014, it commuted the death sentence of Perarivalan to life imprisonment along with those of Santhan and Murugan on grounds of delay in deciding their mercy petitions.
Nalini’s death sentence was commuted to life imprisonment in 2001 on the consideration that she has a daughter.

Congress on Friday termed “totally unacceptable and completely erroneous” the Supreme Court order directing the premature release of six remaining convicts serving life sentence in the Rajiv Gandhi assassination case, saying the court has not acted in consonance with the spirit of India.
Congress also said it disagreed with its former chief Sonia Gandhi, whose appeal helped in the commutation of death sentence of convict Nalini, asserting that she was entitled to her personal views but the party’s stand had been consistent on this over the years. The party said it intended to take “all available remedies, be it review or any other form of legal redress”.
Several Congress office-bearers attacked the Modi government over the issue with Rajya Sabha MP Randeep Surjewala asking whether Prime Minister Narendra Modi and his government sup-port the release of terrorists and will they get the court verdict reviewed.
Congress spokesperson Abhishek Manu Singhvi said the court’s decision ordering the release of six of the convicts has shocked the nation’s conscience and has invited serious concern and criticism from all sides of the political spectrum. Asked about the statements of forgiveness by Sonia Gandhi, Rahul Gandhi and Priyanka Gandhi in the past, Singhvi said the party’s stance has been the same despite the statements of the Gandhi family as it considers this an “institutional matter”.
“It is a matter for example where my views are same as that of the central government. So this is not politics. Certainly Mrs Sonia Gandhi above all is entitled to her personal views but with greatest respect the party does not agree with that view, has never agreed with that view and has made its view consistently clear and we stand by that view because according to us the sovereignty, integrity and identity of the nation is involved in a prime minister’s assassination, sitting or former,” he said.
Earlier, Congress general secretary in-charge communications Jairam Ramesh said the decision of the Supreme Court to free the remaining killers of the former PM is “totally unacceptable and completely erroneous”. “The Congress party criticises it clearly and finds it wholly untenable. It is most unfortunate that the Supreme Court has not acted in consonance with the spirit of India on this issue,” he said.

GST mop up grows 11% in November