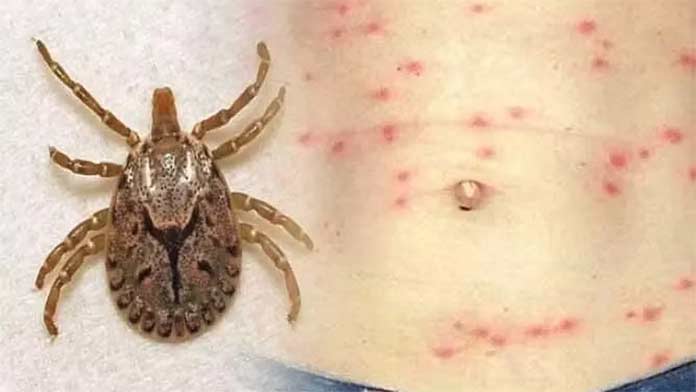 Three persons, including a three-year-old girl, died due to outbreak of scrub typhus, a bacterial disease at a village in Manipur’s Kangpokpi district.
Around 20 are under medical care with symptoms of the infectious bacterial disease, reports said.
Scrub typhus is an infectious mite-borne disease caused by Orientia tsutsugamushi, and if untreated, could lead to death.
Fever, headache and measles-like rash around the neck are the common symptoms of the disease, according to the health officials.
The deceased were identified as Leijangliu (70) wife of late Hemcha, Maingouthanliu (3) and Kimwangbou (8). All residents of Makui village of Kangpokpi district.
Death certificates issued by the RIMS hospital authorities confirmed that the three-year-old girl and the eight-year-old boy died due to scrub typhus infection.
Reports said that the eight -year-old boy who died at RIMS hospital, Imphal on November 7 was admitted to the hospital on October 22. The doctors diagnosed him with the infectious bacterial disease.
The three-year-old girl was also admitted at the same hospital (RIMS) on November 4 where she died on the same day after a brief medical treatment.
However, the 70-year-old woman died at home, the report said.
Makui village authority, in the meantime, informed that around 20 people of the village have fallen sick with similar symptoms of scrub typhus and are attending medical treatment at various hospitals in the district and Imphal.
The village authority drew the attention of the concerned authorities of the state government.
In response, the state health department has sent a team of doctors from Kangpokpi district headquarters to the village to investigate spread of the disease.
Manipur has a history of the spread of the scrub typhus and in recent memory. The disease had claimed the life of a 14-year-old boy in Imphal East district in August this year.
In September, two police personnel posted in Bishnupur district were diagnosed with the bacterial disease.
In 2017, a 20-year-old youth from Sekmaijin village of Imphal West district who fell sick after being bitten by an unknown insect had also been diagnosed with the bacterial disease.