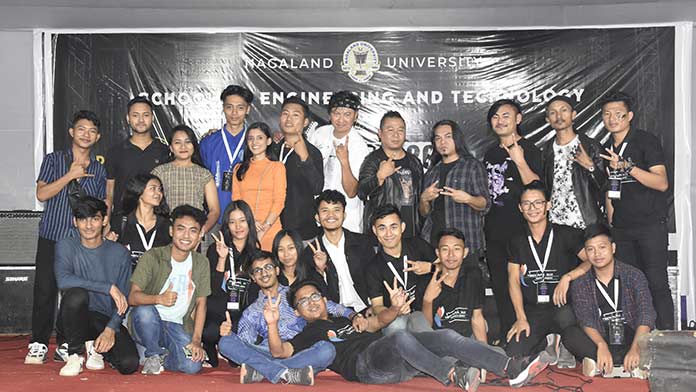 School of engineering and Technology, Nagaland University (SET-NU) held its 13th annual technical festival “Techaura” from November 1 – 4 at the college academic block, DC Court junction, Dimapur. The opening day was graced by a well-known philanthropist and politician, Dr. Roland Lotha.
Marnung Longkumer from Immanuel College and Punam Kumari from Eastern Christian College were crowned Mr & Ms Techaura 2022 respectively. Kinokali T. Aye, student at Musik-A School won the Voice of Techaura while music band Code-27, from Chumoukedima, won the battle of the bands and The Redeemers, from Karbi Anglong, finished as the runners-up.
The festival drew more than 140 participants from various schools, colleges of Nagaland and the neighbouring states.
The chief guest of the closing day was GB of Hevishe village, Kahuto Chishi Sumi. The chief guest stated that hypocrisy was the biggest problem Nagaland is facing and not corruption. The guest of honour was a well-known social activist, entrepreneur, Sentimeren Pongen, who also urged the students to refrain from glorifying government jobs as there is an abundance of opportunities at the private sector. He further appealed them to do what they love and urged them to just stop if they don’t love what they are doing.
Techaura, a national-level technical festival is organized every year by the final year students of SET- NU to commemorate the science and technology that helped mankind to get where they are at present.
The festival aims at igniting the technical flair in the youths by providing them a platform to display their creative aptitude.
The festival had a plethora of competitive events such as model presentations, competitive coding, gaming, robotics, bio lab and bio PPT art, quizzes, techno art, photography, selfie contest, spelling bee, Otaku quiz, pancake making, voice of Techaura, battle of the bands, dance battle, Mr & Ms Techaura 2022, etc.
Renowned band from Kohima, Fifth Note, winner of Ticket to Hornbill 2019, performed at the closing night of Techaura.