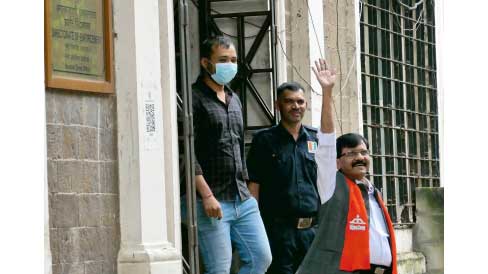 A Special PMLA Court here on Monday sent Shiv Sena MP Sanjay Raut to a 14-day judicial custody till August 22, eight days after he was arrested by the Enforcement Directorate (ED) in an alleged money-laundering case.

PMLA Court Special Judge M.G. Deshpande granted Raut judicial remand after the ED informed that it did not require his additional custody for the probe into the Rs 1,034-crore scam.

On July 31, the ED had raided Raut’s residence in Bhandup, detained him and arrested him in the wee hours of August 1 in connection with the alleged money-laundering case emanating from the redevelopment project of the Patra Chawl, Goregaon, by Guru Ashish Construction Pvt. Ltd., a subsidiary of the HDIL.

On August 6, the ED interrogated the MP’s wife, Varsha Raut for around 10 hours in the same case in which it had earlier arrested his close associate, Pravin Raut, a former director of the Guru Ashish Construction Pvt. Ltd.

Sanjay Raut, 61, was earlier sent to a four-day ED remand which was extended by three more days till August 8, followed by the two-week long judicial custody granted on Monday.

While ordering judicial custody, Special Judge Deshpande took cognisance of the MP’s medical records pertaining to his heart ailments and permitted him home-cooked food along with his medicines as prescribed by the doctor.

In April the ED had attached properties belonging to Varsha Raut and Pravin Raut and two others, worth around Rs 11.15 crore as part of its probe.

They included plots belonging to Pravin Raut in Palghar, Raigad, and a flat belonging to Sanjay Raut’s wife in Mumbai, and properties she held jointly with another associate, Swapna Patkar.

On July 1, Sanjay Raut was grilled for over 10 hours by the ED and then summoned again on at least two occasions, but he skipped the same citing the ongoing monsoon session of Parliament.

ASEAN vows to end pact with China on disputed territory