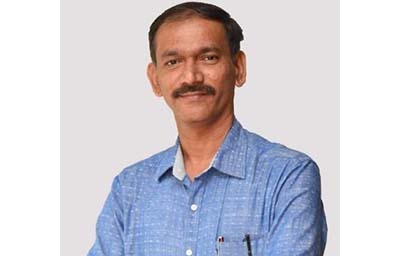 Panaji: Former Goa Congress Chief Girish Chodankar, who suffered political loss after 10 MLAs defected to the BJP in 2019, has equated the move of Shiv Sena’s rebels to “axing one’s own feet” and has called their act as “political suicide”.

Chodankar, speaking to IANS, said that as per the 2003 amendment to the anti-defection law, there is no question of split and only a merger counts.

“Their move would have been correct if it was before 2003, but today it is a political suicide and I would say it is like axing own feet,” Chodankar said.

“My petition, in regards to defection of 10 Congress MLA’s (in Goa), is pending before the Supreme Court on the question whether two-third of MLAs can merge without a decision of political party,” he said.

“By making such a move, they have committed political suicide. Now they have no option but to return to their parent party Shiv Sena or else they will have to be disqualified under the tenth schedule by the Speaker of the House,” he said.

In October 2019, during the last term of BJP government, 10 MLAs of the Congress along with Leader of Opposition Chandrakant Kavalekar had switched over to the BJP. However, Kavalekar along with other six defected MLAs lost the Assembly elections held in February 2022. The Leader of Opposition and others joining the ruling fold had invited ire and criticism from a section of society. The Congress had challenged their move with the Goa Speaker and subsequently in the High Court. Now the matter is pending before the Supreme Court.

In the Bombay High Court judgment in Girish Chodankar vs Speaker of Goa Legislative Assembly petition, the HC had upheld the Speaker’s order that merger of two-third members of a legislative party with another political party would be deemed merger of the original political parties.

“Even if we consider this judgment as ‘law of today’, still Shiv Sena MLAs have lost that opportunity. Their various conduct, including speaking with media against party decision to have alliance with the Congress and NCP or their demand to have alliance with the BJP amounts to voluntarily giving up membership of the party under para 2 (1) of the Tenth Schedule. Since 2003, no political group of any political party in India can claim a split as such provisions were deleted in 2003, while amending the tenth schedule,” he said.

He further said that the Speaker has no powers of merger of political parties, only the Election Commission of India has those powers.

“Deputy Speaker of Maharashtra Assembly has issued notices to the 12 rebel MLAs on the disqualification plea by Thackeray’s fold, hence if the interim order on disqualification is given by the Speaker, then they would be in no position to claim two-third formula to merge with the BJP to evade disqualification. Hence, they have no option than to return to the Shiv Sena. As per the law laid down by the supreme court in respect of the tenth schedule, it is the Speaker who will have to decide the issue of disqualification first,” Chodankar said.

“I think without studying the legal aspects of merger and peeping into the 2003 amendment, Eknath Shinde along with other boarded the ship for unsuccessful sail,” he said

“Politicians, who switch parties for their vested interests, cause loss to the state and nation. Those who encourage them for vested interests and usurp power, will also face the wrath of the public in future,” Chodankar said.

“I had moved a petition before the SC to direct the Speaker of Goa Assembly to expedite my petition and to dispose of it within time bound, but SC had said it can’t direct the Speaker as the Speaker is the constitutional authority to decide about disqualification petition. Till the petition is disposed of, no court can interfere with the Speaker’s authority,” Chodankar, replying to a question about Shiv Sena rebels’ move of approaching SC, said.