Students protest in Brussels against high cost of living 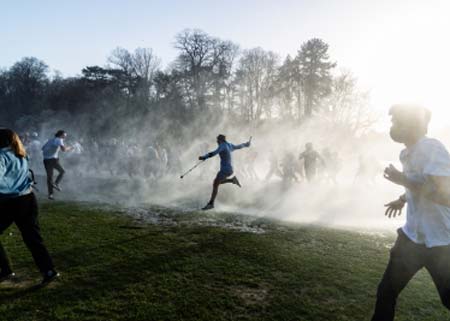 An estimated 150 students held a demonstration in Brussels to denounce the high cost of living and to urge the Belgian government to provide greater support.

“We came to demonstrate because it is becoming very difficult to be a student, to be able to pay for our studies,” Emilia Hoxhaj, president of the Federation of Francophone Students (FEF) and a student at the University of Mons, told Xinhua news agency on Thursday.

“Our rents are increasing, our bills are becoming unpayable and above all, we also find it difficult to buy food in supermarkets, where everything is becoming far too expensive.”

Jonathan Mongala, an economic sciences student at the Free University of Brussels (ULB), said he had to take on part-time jobs to pay for his studies and food, and as a result, he had less time to study.

Florian Gillard, also a ULB student, was was campaigning for the remuneration of interns.

“Students do a lot of internships and they’re free work. This is not normal. Whether it is in the hospital sector, where interns compensate for a lack of public funding for hospitals, or whether it is free work in companies, it is not acceptable, we must be paid,” he said.

The measures taken by the government to address the cost-of-living crisis are insufficient, the FEF argues.

“Eighty thousand students are in a precarious situation, and more than a third of them do not receive scholarships,” another student said.

The FEF has five specific demands: it wants affordable student housing; student canteens with hot meals at the symbolic price of one euro; an increase in scholarship value; a 12-euro public transport ticket for all students; and sufficient school premises that are open and accessible during the winter.

Before the current crisis, one student in three lived in poverty in Belgium, and this proportion will only increase without strong, structural measures, the FEF argues.

The country’s statistical office said that inflation in Belgium rose to 12.27 per cent in October, its highest level since June 1975.

The high inflation rate is mainly due to the high energy prices.