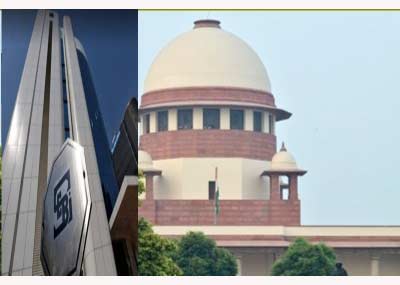 The Supreme Court has dismissed a petition by Securities and Exchange Board of India (SEBI) by a 2:1 majority opinion, seeking review of its August 5 judgment, which directed the market regulator to share certain documents with Reliance Industries (RIL).

In an order, a bench headed by former Chief Justice U.U. Lalit and comprising Justices J.K. Maheshwari and Hima Kohli said: “The Chief Justice of India by order dated October 19, 2022 directed that notice be issued in the review petition. Justice J.K. Maheshwari and Justice Hima Kohli by order dated October 19, 2022 dismissed the Review Petition. In view of the majority opinion, the Review Petition stands dismissed in terms of the signed orders. Pending applications, if any, shall stand disposed of.”

Justices Maheshwari and Kohli, in the majority opinion, said: “The Chief Justice of India has circulated his order dated 19.10.2022, issuing notice on the Review Petition, returnable on 23.11.2022. With due respect, we are unable to agree with the same, having already expressed our view in our separate orders dated 30.09.2022 that no grounds are made out by the Review Petitioner meriting issuance of notice or for reviewing the judgment dated 5.8.2022, passed by this Court while disposing of Criminal Appeal No.1167 of 2022.”

In another development connected with the case earlier, the Supreme Court had also issued a contempt notice to SEBI on RIL’s plea alleging non-compliance of court’s August 5 order, which directed the market regulator to provide access to certain documents to the company.

A bench comprising Justices M.R. Shah and M.M. Sundresh said: “Issue notice to the respondent, making it returnable on December 2, 2022. Abhishek Singh, counsel accepts service of notice on behalf of the respondent.”

The bench headed by Justice Shah, in its order, noted” “We have gone through��the subsequent order passed by this court dated October 12, 2022 in review petition. The pendency of an appeal and/or writ petition along with stay cannot be equated with pendency of the review petition.

“There is a final decision by this court in an appeal. Merely because the stay application is pending in review petition cannot be a ground to grant stay by the respondent on its own and not to comply with the directions issued by this court.”

The market regulator has refused to entertain RIL’s request to share the privileged documents on the grounds that under the SEBI (Settlement Proceedings) Regulations, the accused company has no right to seek information from it.

The apex court, in its August 5 judgment, had rejected this stand of the market regulator.

RIL had claimed that documents will exonerate it and its promoters from criminal prosecution initiated in a case related to the alleged irregularities in acquisition of its own shares between 1994 and 2000.

On August 5, a bench led by then Chief Justice N.V. Ramana (retired), had said: “The approach of SEBI, in failing to disclose the documents, also raises concerns of transparency and fair trial. Opaqueness only propagates prejudice and partiality. Opaqueness is antithetical to transparency.”

The top court had said the market regulator should show fairness and furnish documents sought by RIL, and SEBI has a duty to act fairly, while conducting proceedings or initiating any action against the parties.

The company claimed that SEBI cannot continue to resist the production of these documents and it had also sent a notice to the regulator saying if documents were not received by August 18, then it will establish that Sebi does not want to comply with the apex court’s judgment.

The complaint cited the issue of two preferential placement of non-convertible debentures in 1994.

SEBI had alleged that RIL along with Reliance Petroleum had circuitously funded the acquisition of its own shares in violation of the Sections 77 and 77A of the Companies Act, 1956.