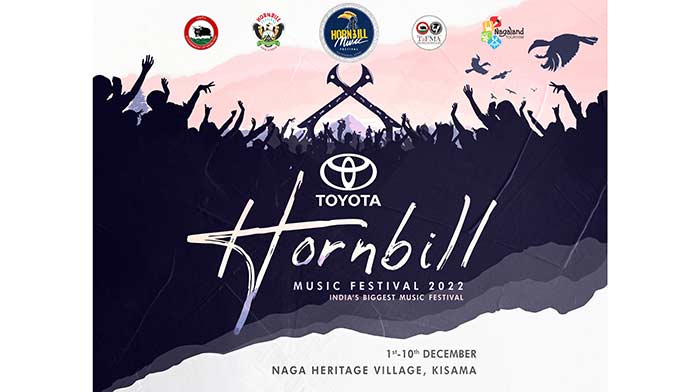 The 23rd Edition of the Hornbill Music Festival, presented by Toyota India, will be held at The Naga Heritage Village, Kisama from December 1-10, 2022. The event will be officially launched by Toyota Kirloskar Motor Pvt. Ltd. vice chairman Vikram S. Kirloskar.
In a press release, TaFMA project director Dr. Hovithal Sothu informed that top bands from the state, region and country will be performing at the 10-day music extravaganza.
Toyota India had earlier taken to Twitter in response to chief minister of Nagaland’s tweet by writing “We’re beyond thrilled to be part of this musical journey! Looking forward to 10 days of grooving to some #awesome tunes and celebrating the rich cultural heritage of Nagaland.”
Expressing his excitement about the Hornbill Music Festival, associate general manager (Regional Strategic Business Unit) at Toyota Kirloskar Motor, Varinder Kumar Wadhwa said, “We at Toyota are glad to partner with TaFMA through a title sponsorship to host the music festival this year. The North-Eastern region has been one of the most important markets for Toyota Kirloskar Motor. This festival brings us a unique opportunity to cherish and promote the richness of these splendid local culture and enable us to connect, contribute to the society’s cultural diversity. We eagerly look forward to the 10-day of grand celebration and join hands with TaFMA and the community to make it a big success”.
TaFMA has expressed gratitude to Toyota India and Okusa Toyota, Dimapur for their support and patronage. It hoped to partner with the global giant for more social engagements especially for the upliftment of the youth.
TaFMA also expressed happiness to have on board its partners: Embassy of Israel in India, JK Trust, Tunecore, RollingStones India, Indian Performing Rights Society, Yes Bank, Embassy of Colombia to India and Samvaad Festival. TaFMA has invited all to join the celebration of music and culture.
TaFMA would share regular concert updates on all its social media handles, digital platforms and print media.