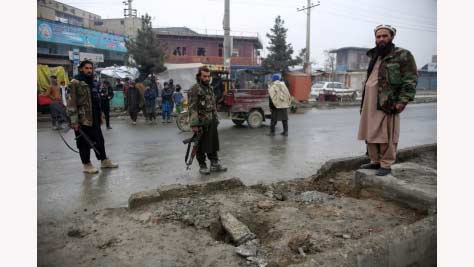 “Forces of Special Units of Islamic Emirate spotted a hideout of IS militants yesterday (Friday) and arrested two operatives and after that stormed their hideout in Police District 8 as a result six insurgents were killed earlier today,” the Taliban-led government’s chief spokesman, Zabihullah Mujahid said in a tweet.

Numerous arms and ammunition including assault rifles, hand grenades, explosive materials and a car have also been seized from the hideout, Xinhua news agency quoted Mujahid as saying.

Some of the dead terrorists were involved in attacks on a mosque in Wazir Akbar Khan and a college in Dasht-e-Barchi districts that left scores of people dead and injured weeks ago.

Mujahid also confirmed that a security personnel had been killed and another injured during the operation.

This is the second operation against the IS in Afghanistan as the Taliban forces in similar operations killed five terrorists in the northern Kunduz province a few days ago.

‘A taste of tradition’ inaugurated in Kohima